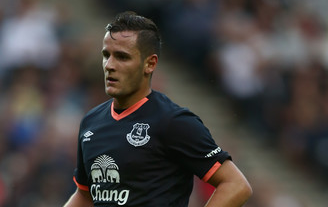 It’s over. At long last, Shani Tarashaj has been released by Everton. The 25-year-old failed to make a single appearance in his four years at Goodison Park and spent the majority of his stint out on loan. The timing of his departure is peculiar as he was only halfway through a two-year loan at FC Emmen, but all will be explained.

What went wrong at Everton?

He was never on the level. Tarashaj joined us on a five-year deal from Grasshoppers in January 2016 and was loaned back to his former club for the remainder of the season. He scored 11 goals and made three assists in 33 Super League games, so big things were expected of the striker at Everton.

Tarashaj couldn’t get playing time over the likes of Dominic Calvert-Lewin, Richarlison, Moise Kean, Cenk Tosun, Sandro Ramirez, Oumar Niasse, Wayne Rooney, Romelu Lukaku and Arouna Kone in the last four years, so the writing has been on the wall for some time.

The 25-year-old’s deal was up in 2021 and there wasn’t a lot of interest from suitors, so we had to take the loss and release him. He would have left next summer on a free transfer either way.

What happened to his FC Emmen loan?

Releasing a player while they’re on loan at another club is unorthodox, but Tarashaj had actually returned early from his stint at Emmen after struggling for fitness while failing to make an appearance. He was meant to be at De Oude Meerdijk until the summer of 2021 but now finds himself a free agent.

After coming back to Goodison Park, Tarashaj had his Everton contract terminated, so we’ve finally cut ties with the Swiss striker. He cost us £3m and £15k-per-week/£0.78m-a-year in wages, so it’s a total loss of around £5.1m.

In other news, here’s why Everton missed out on Sergio Romero and how Manchester United botched transfer