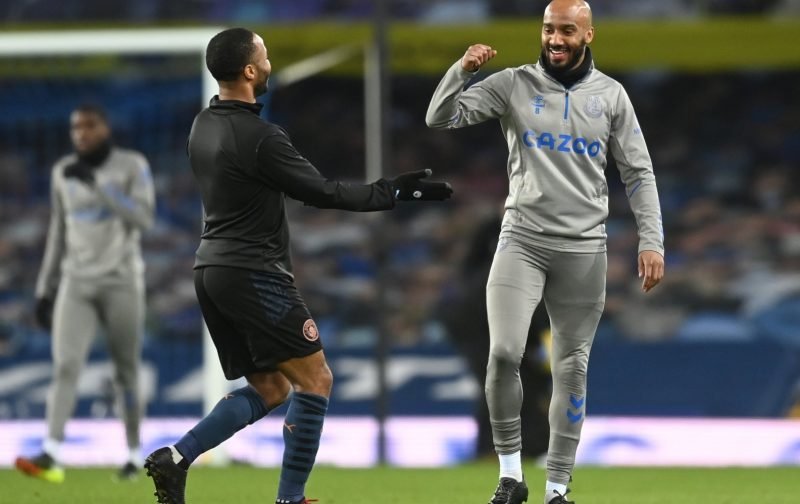 Arguably more surprising than Everton winning at Arsenal on Friday—the last time they earned a victory at the Gunners was 21 years ago—was seeing Fabian Delph emerge from the bench to play a part in the game.

The midfielder has been besieged by injury problems since joining the club from Manchester City in 2019 and has done little to endear himself to supporters in that time period.

In addition to the familiar fitness issues, something that has blighted him throughout the entirety of his career, he was involved in some unsavoury social media exchanges with fans last year and in the rare occasions he has been on the field in a blue shirt, he’s struggled to make much of an impact.

So with the match in the balance at the Emirates Stadium, it was odd to see Delph being readied, especially given he had donned socks a different colour to the rest of his team-mates.

When he was on the pitch he struggled to get into the game—he was quickly booked and sliced a simple clearance forward into a dangerous area—but eventually played his part in helping the Toffees over the line and keeping their European hopes alive.

Everton have been hit hard by injury problems in midfield this season, with Abdoulaye Doucoure and Jean Philippe-Gbamin still unavailable. However, Ancelotti did have Tom Davies on the bench on Friday night and it was intriguing to see the Italian turn to Delph ahead of him to replace Andre Gomes at a point where the Toffees’ season was effectively on the line.

It would indicate that Delph is alongside Davies at least in the Everton midfield pecking order and that if he can retain fitness, he will get opportunities between now and the end of the campaign.

Given his conditioning struggles, indifferent form and the prospect of the Toffees strengthening their midfield options come the summer transfer window, it feels as though the final six matches of this season may be Delph’s last opportunity to make a lasting impact at Goodison Park.