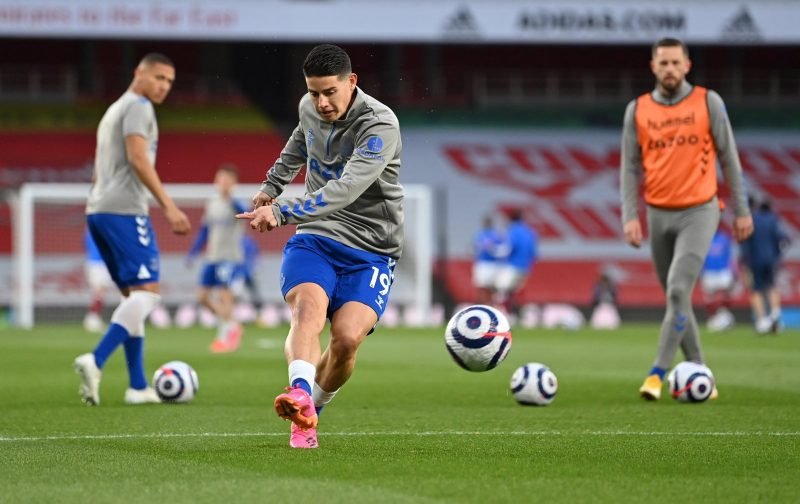 Any Evertonian will tell you that watching James Rodriguez in royal blue this season has been a joy.

So news that the club are already working on a possible contract extension will be to the delight of plenty.

According to Marca in Colombia (h/t Lucas Sposito of Sport Witness), Everton want to tag on another year to Rodriguez’s deal, which runs until the end of the 2021-22 season. Getting the playmaker tied down to fresh terms is said to be “the club’s main objective” as the Toffees believe the 29-year-old is a “pillar” to build around.

When Rodriguez joined Everton, it was confirmed that he had signed a two-year deal and that there was an option for a third.

Given the Colombian was out injured for the few matches in which supporters were allowed in to Goodison Park over the Christmas period, no Evertonians have seen Rodriguez in the flesh yet.

The midfielder has been responsible for some of the best moments in Everton’s European push, netting some excellent goals, creating chances with ease and in recent weeks putting in a shift for the team too.

Overall, the signing has been positive and the prospect of Rodriguez being even better next season is good. However, there’s no huge need for Everton to rush into tying the midfielder down for another year.

A lot can happen in a season and while Rodriguez’s quality is clear, his injury record is a little concerning. For Everton, agreeing to pay another year of substantial wages to a player who may be even less dependable from that perspective in two year’s time may be risky.

The ball appears to be in Everton’s court too, as they included the option to extend Rodriguez’s deal by another campaign; there doesn’t appear to be any time restriction on when that can be activated.

If this was to be triggered soon, there’s little doubt that those on the blue half of Merseyside would rejoice. But for the time being, Evertonians should enjoy watching this wonderful technician and get excited for the day they can see him in the flesh in the near future.