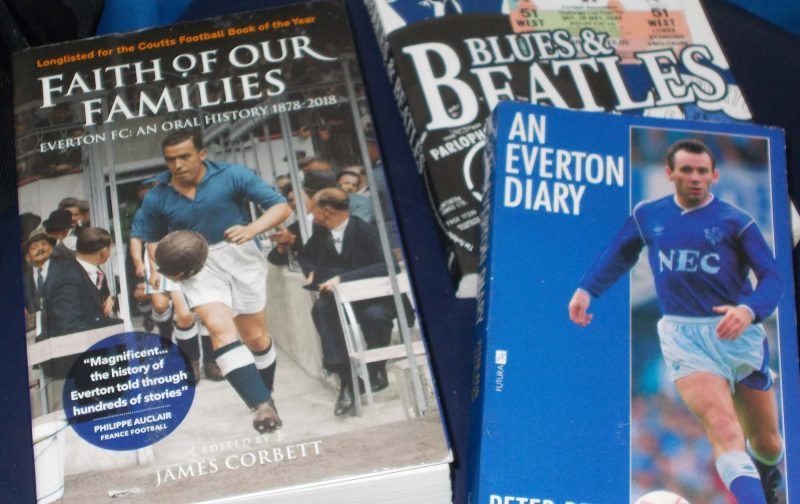 Fathers’ Day is nearly upon and if you have a dad, who is an Evertonian, I’d like to suggest a few books that would make good presents. Also, if you off on holiday and want to read on the beach or by the pool, these books would be excellent choices.

The first book I want to mention is “Alan Ball, The man in the white boots” by Dennis Tossell (Hodder and Stoughton 2017.) There are three autobiographies by Ball, written with the help of a ghost-writer, I think. Although Ball was no fool, he passed his 11-plus and went on to grammar school, but there was only one career for him.

This book is incredibly well-researched and well-written. It covers his career as a player, including those magical years he was at Everton and his relationships with fellow players and managers, including Harry Catterick, who bought and sold him and Don Revie, who wanted to buy him for Leeds, after the World Cup. Revie also made him England Captain and stripped of it.

Her latest is “The Little Book of Everton Haiku.” It’s a quick read and a wonderful poetic paean to and about the subject. I’m planning to make a video and read some of them in the near future.

Next is Neil Roberts, who has written two books involving the Blues. One is “Everton FC on this day.” It’s very interesting as it covers Everton related events for each day of the year. A companion book to this is “Faith of our Families,” which is an oral history of Everton from 1878 to 2018, it’s edited by James Corbett, who has been involved in many other Everton projects.

There are many player autobiographies out there, but I want to mention two books by Peter Reid.

The first is “An Everton Diary” and his co-written with Peter Ball. It’s a diary of 1986 and relates Reid and Everton’s successes and failures on the pitch as well as England in the 1986 World Cup in Mexico. What I found interesting was the matter of fact way Reid dealt with the injuries that plagued his career. It’s funny (he is a Scouser.) As well as being moving and passionate.

Next is his autobiography, “Cheer up Peter Reid.” It relates the story of Reid, who despite his success as a player at Everton has never forgotten his roots, nor his political leanings. And is not afraid to talk about it.

You can find all of these books on Amazon.

And if you really, really want to….there’s probably still time to buy Dad an Everton Tie. I have a couple and they are quite nice, even almost posh.

Opinion: Brands has a touch of Catterick’s stealth about him when it comes to Everton’s transfer dealings