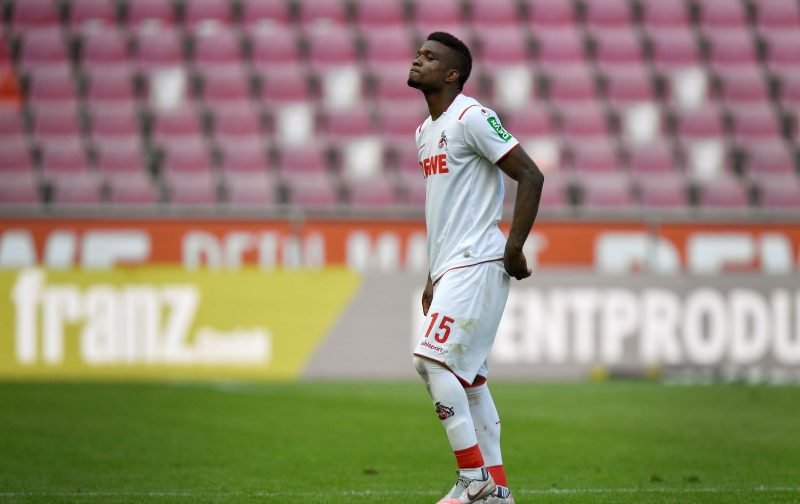 Some Everton fans have been reacting on social media following reports the Toffees have expressed an interest in signing FC Koln striker Jhon Cordoba during the summer transfer window.

German regional outlet Express cited reports from Colombia over the weekend, which claimed Everton have joined Wolverhampton Wanderers and Sheffield United in courting Cordoba ahead of a potential move to the Premier League.

Blues boss Carlo Ancelotti is believed to have personally expressed his desire to acquire the 27-year-old Colombian, as the Italian is hopeful of signing a ‘beefy striker’ who can help expand the strike force already at Goodison Park.

Everton are unable to advance their interest with a formal offer yet, as it is noted the Merseyside outfit must first sell some of the players Ancelotti no longer requires in order to free funds for any concrete transfer activity.

Cordoba is not expected to warrant a sizable transfer fee, despite netting 14 goals and penning three assists over 31 outings in all competitions this season, as the 11-cap international is in a contract standoff with Koln.

The Bundesliga outfit saw their first effort at retaining Cordoba beyond 2021 fall short when the attacker turned down the proposed new terms feeling they were ‘unsatisfactory’, and Express add that Head of Sport Horst Heldt has confirmed there has been no further proposals tabled.

Everton fans have not been left overly excited by reports linking Ancelotti with interest in Cordoba, with only a handful open to seeing the Colombian signed this summer.

Wouldn’t say no to big Jhon tho

Most of the reactions offered on social media from Everton supporters saw fans slam Cordoba, with many of the belief the 27-year-old would not be an upgrade on those already at Goodison Park.

Dominic Calvert-Lewin and Richarlison ended the 2019/20 season as the Toffees’ joint-top goalscorer across all competitions with 15 goals over 41 appearances respectively, eclipsing the efforts of Gylfi Sigurdsson and Bernard who struck home the second-most times with three goals each.

This lad is honestly terrible https://t.co/6uMHlikTFY

The only good thing about Cordoba are the brilliant swords that are handcrafted there. Unfortunately this man is not the right foil for the blues. Sorry but the 3 we have are better now and have more potential. NSNO. Paper talk again.

For some Everton supporters, reports linking their side with yet another player has simply left them in a downbeat mood, feeling that far too many players are being touted without any actually moving to Merseyside.

Everton appear to have lost out in the hunt for Pierre-Emile Hojbjerg, with the Southampton midfielder expected to finalise his transfer to Tottenham Hotspur early this week with a medical scheduled for Monday after Spurs agreed to pay £15million plus bonuses whilst sending Kyle Walker-Peters the other way for £12m.

Getting sick of all this. Please tell me if we ever sign anyone 🤦‍♂️