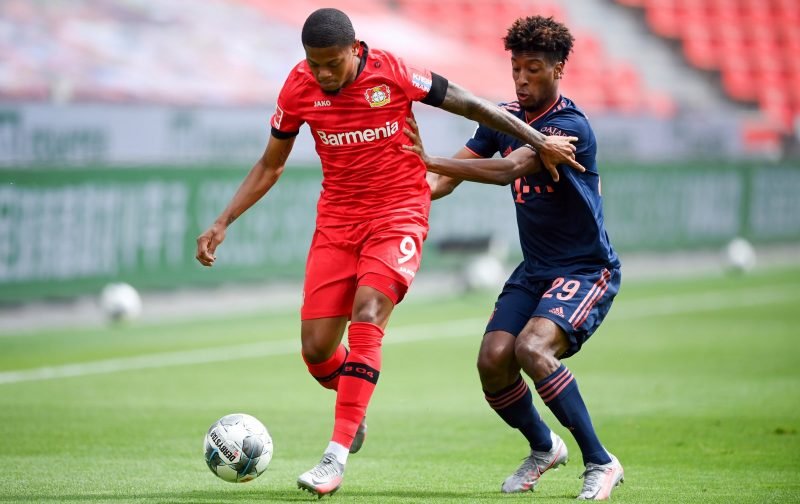 A few Everton fans have been reacting on social media after Leon Bailey’s agent suggested the winger could leave Bayer Leverkusen during the summer transfer window.

Aidy Ward has been speaking with Sport 1, via Bulinews, of his client’s future in the Bundesliga, and informed the German publication that he intends to hold talks with Leverkusen to see whether the club would be prepared to sell the 22-year-old.

Leverkusen are believed to have informed Bailey’s step-father that the Jamaican will only be allowed to find a new home if they receive a suitable offer, having slapped an approximate €40million (£36.1m) asking price on the forward amid interest from Everton and Tottenham Hotspur.

Any move would come off the back of a slack campaign for Bailey, who started just 12 of his 22 Bundesliga appearances as a result of injuries and two red card suspensions, though was still able to find the net five times and provide three assists – including a game-winning brace against Bayern Munich and the third-equaliser in a 4-3 win over Borussia Dortmund.

Bailey being without a league goal since matchday 24 of the 2019/20 Bundesliga campaign did leave some Everton fans underwhelmed by their side’s rumoured interest, but the Jamaican’s overall game was enough to convince a few.

The winger averaged 32.1 touches per German top-flight game this season, with which he played 1.0 key balls, took 1.0 shots, delivered 1.0 accurate crosses, made 1.6 successful dribbles and won 3.1 duels. He also created three big chances to score and spurned four big chances to find the net himself, per Sofa Score.

Wasn’t convinced with him considering his recent form. Then watched this, now convinced.

Looks like he’s exactly what we need. Hopefully we are genuinely interested and can get a deal over the line. Richy and DCL will have a field day with him and Gordon / Iwobi (if he improves) on the other wing…

There are a handful of Everton fans who would like to see Bailey join Carlo Ancelotti at Goodison Park next term, but feel the price in question will need working on before Director of Football Marcel Brands signs off on any deal.

This is likely another case of a second club being mentioned to drive interest. But if, and its a big if, we got Bailey Allan and Gabriel I’d be ok with the window. Kenny is ok for this year, Pickford will be protected more and it’s going to take a few windows to sort everything.

Tottenham’s speculated interest did not go amiss, either, with many Blues supporters not at all surprised to see Spurs mentioned in reports of their side’s transfer plans after the debacle which surrounded Southampton’s Pierre-Emile Hojbjerg.

Typical Spurs. Not surprised though as their transfer policy is go after anyone Everton are.