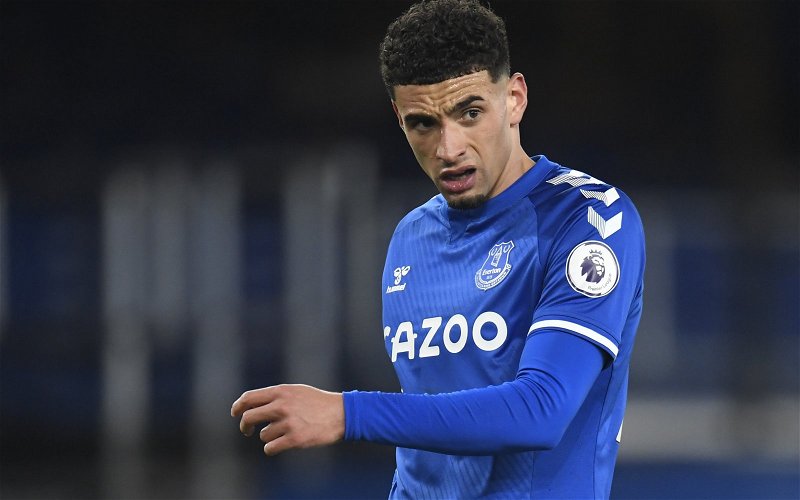 It’s been a fortnight to forget for Aidy Boothroyd and his England Under-21 side, as a 2-0 loss to Portugal on Sunday night left them on the brink of elimination from the 2021 European Under-21 Championship.

While the overall performances of the team have sparked questions about the development of some of the country’s most exciting young talents on the international stage, there have been some glimmers of positivity from a miserable tournament.

Ben Godfrey is one.

Evertonians watching on have not been surprised to see the 23-year-old puff his chest out in such adverse circumstances, as his robust defending and pugnacious attitude have been hallmarks of a season of improvement for the Toffees.

His talent has prompted manager Carlo Ancelotti into making him arguably the first name on the team sheet in defence for the Blues, be it at left-back, right-back or more recently in his preferred centre-back berth.

While those immersed in the Everton bubble have been championing Godfrey’s brilliance for months, the wider footballing world seems to be waking up to his progress. England senior manager Gareth Southgate will surely be aware of his emergence.

Southgate is a coach unlikely to make too many major alterations to his squad between now and the European Championships this summer, albeit leaving Michael Keane out of his most recent selection raised a few eyebrows on the blue half of Merseyside.

Yet Godfrey feels like he’d be worth consideration at this late stage in the scrap to get on the plane.

Although he still has strides to make, having an option like Godfrey—whose versatility and dynamism far outstrips that of the likes of Tyrone Mings, Connor Coady and Eric Dier—would come in handy over the course of a summer tournament.

It’d represent a small gamble from the manager and it feels a step too far for the Everton man at this stage. Nevertheless, on current form it won’t be long until Godfrey is in contention for minutes for his country at senior level.