‘Save us’, ‘Difficult to be worse’ – These Everton fans debate unlikely debut for 19-year-old 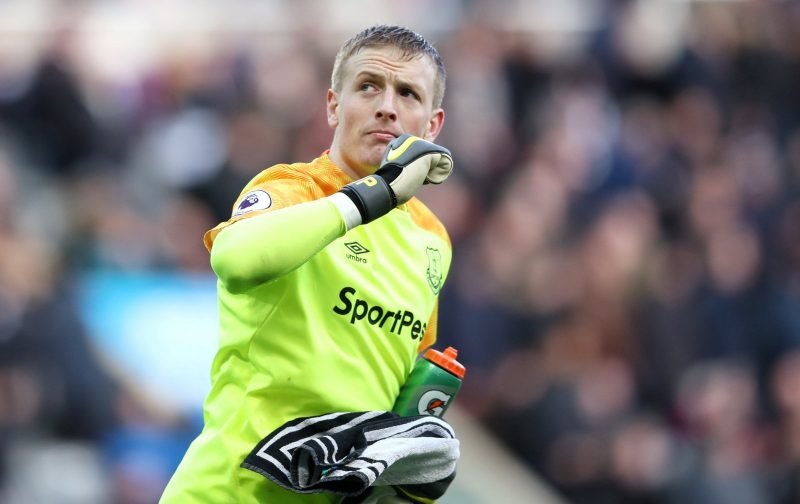 Jordan Pickford has done himself no favours once again, and fans on the Grand Old Team forum have taken his latest horror show as a reason to debate handing Joao Virginia an unlikely debut.

The England number one had almost seemingly just redeemed himself in the Merseyside Derby for the horrific blunder that gifted Divock Origi a late match-winning goal in the reverse fixture.

Our man, though, thought against continuing in this vein of form at Newcastle and was lucky not to be sent off when he speared into the side of Salamon Rondon to prevent the Venezuelan scoring from his error.

The on-loan West Brom striker did eventually fire past the former Sunderland shot-stopper, however, when his second-half effort flew in under Pickford’s body before he failed to deal with Miguel Almiron’s 30-yard strike and parried the ball back into the centre of the box for Ayoze Perez to equalise.

Unfortunately, a lack of depth in the position has worked in the 25-year-old’s favour for much of the season, with Maarten Stekelenburg the only other senior ‘keeper on the books.

Virginia, meanwhile, moved from Arsenal to Merseyside in the summer for an undisclosed fee, but is yet to make a senior appearance in Blue, although he has caught the eye for our Under 23s with seven clean sheets in nine Premier League 2 games.

If Marco Silva were to hand the Portugal Under 21 international his first Toffees outing, his debut would be a baptism of fire, as our next game comes against Champions League-chasing Chelsea who we have not beaten in the league since 2015.

Even if Virginia’s countryman does not consider his inclusion, Pickford’s latest errors did at least spark the debate on the Grand Old Team forum…

“The lad doesn’t even make the bench and now people are saying lash him in goal. You people really don’t handle defeat in a sane rational way at all.” – MarcelsGoat (March 10, 17:57)

“I’ve seen him play at U23s level he’s the best young goalkeeper we’ve had for years. The perspective is though that this is U23s level, it’s a bit different commanding your area and claiming crosses, which he does well, compared to having a big PL striker giving you a clattering. It would be foolish to drop Pickford for him, but if we end up with an injury or red card requiring a keeper to step in as one-off then I’d go for Virginia over Stek.” – BlueLoon (March 10, 19:28)

“Everton should of got Fabianski when Swansea went down excellent goalkeeper” – GiantHogWeed (March 10, 19:47)

“Must start Stekelenburg against Chelsea – a statement I’d never have believed I’d ever have to type. Hand Virginia his debut in another game.” – Davek (March 10, 20:32)

“Why not just hand Virginia a start? I’m not sure I ever want to see Stekelenburg in goal again, awful memories of Koeman!” – CatcherInTheRye (March 10, 22:30)

“Nothing to lose playing this kid if Silva wants to save his job. It’s quite difficult to be worse than Pickford at the moment unless you’re on a match-fixing payroll.” – Axlswhk (March 11, 05:29)