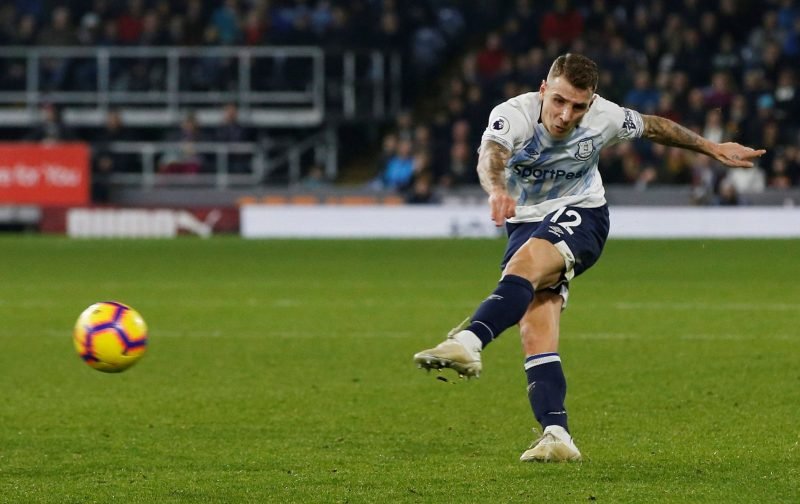 Lucas Digne was one of the top performers in our win against Arsenal, and now the French fan favourite has seen his efforts rewarded with a place in WhoScored’s Team of the Week.

Based purely on stats, our man was the top performing left-back in the Premier League between April 5 and 8, as he recorded a 7.8 rating thanks to a 100% tackle success rate, three interceptions, and won three of his four aerial duels.

Digne also had a hand in Phil Jagielka’s 19th Toffees goal thanks to his long throw-in, but that does not come into effect with WhoScored’s data, as the ball did not directly connect with the Englishman.

For overall ratings for the term, Digne is miles clear of his nearest positional rival, as well, with his average score of 7.47 eclipsing that of Brighton’s Bernardo by 0.31, Watford’s Jose Holebas by 0.33, and Chelsea’s Marcos Alonso by 0.34. Liverpool’s Andrew Robertson, meanwhile, has dropped to a 7.09.

It’s no surprise, really, that Digne was acknowledged for his efforts at the weekend, as his number of tackles were close to double his ninety-minute average and interceptions were up 50%, while aerial duels were marginally above his 2.8 per game.

Despite scoring the winning goal, though, there was no place for Jagielka, with Arsenal’s Sokratis Papastathopoulos making his way into the side instead.

Idrissa Gana Gueye, who was a potential Man of the Match candidate, also failed to score highly enough to warrant a place, with Burnley’s Ashley Westwood and Leicester’s James Maddison taking the central-midfield spots.