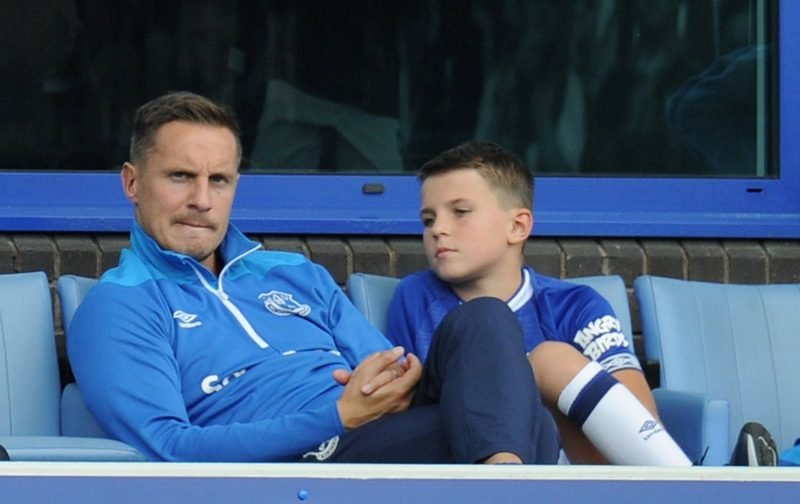 Everton fans have been in an argument on the Grand Old Team forum recently, debating whether or not the club should offer Phil Jagielka a new contract following his exploits against Arsenal.

The veteran defender was thrust back into the starting XI at the last moment, after Michael Keane fell ill during the warm-up, and yet the 36-year-old did not look out of place and poked home the decisive goal of the game.

He is, however, out of contract in the summer, and there are no guarantees that he will be offered a new deal given his age, games played this season and current wage.

Spotrac note that Jagielka currently earns £50,000-a-week, which is just £10k shy of what Michael Keane reportedly banks, even though our long-time club servant is fourth in the pecking order at Goodison Park.

Jagielka has also shown that he has become prone to lengthy absences, with a knee injury scuppering his start to the season, before Marco Silva simply opted against selecting our captain for the matchday squad.

The only times this term that Jagielka has been involved in the matchday squad and not featured in some capacity was against Burnley, Brighton, Lincoln, Liverpool and West Ham. In comparison, Silva has ignored the former England ace on 21 occasions.

“Ok, let’s blow a wedge on a 4th choice CB who will sit on the bench all season, get shot of Jags and his massively reduced deal, and not invest the money in a goal scorer or Idrissa Gana Gueye replacement.

“Madness, those saying use one of our young players…. What, for three games a season? That’ll help their game! The money needs to go on areas we are desperate, not someone who’s going to sit on the bench all season.” – Bol-UK (April 9, 15:20)

“Buy a first team centre back (Kurt Zouma, let’s say) and then have three senior centre backs in Keane, Yerry Mina and Zouma with Mason Holgate back from a productive loan spell to act as the 4th option and cover at full back. Jagielka is old now, and for his salary he does not and cannot contribute enough to represent good value. One good performance does not change this.” – Tez (April 9, 15:27)

“Holgate needs to go back on loan, not sit on the bench. Jags will be on a massively reduced deal if he is offered one. We would have three senior CBs and Jags, who has impressed in all his most recent appearances as last resort/back up. No signing fee, no settling in, tiny wage, free up cash for important areas and keep young kids playing every week on loan not sat on the bench.” – Bol-UK (April 9, 15:48)

“The club captain and player of over a decade? You think the club would offer him a contract on massively reduced wages? I don’t see it. I think he’d get an extension on his existing deal and that would be too much for how much he brings. Holgate has been on loan and done well. Now he comes back and slots into the squad in place of a veteran who’s contract is up. Makes perfect sense.” – Tez (April 9, 15:52)

“He doesn’t make the bench when our three main CBs are fit, so you want to put Holgate there!!!!!!! This is EXACTLY why Jags is there, he’s on a retainer and not ruining his career by not playing. Common sense” – Bol-UK (April 9, 16:19)

“I expect all four centre backs to (and be capable of) playing a significant amount of games throughout a season. Jagielka is not capable of this which is why he’s been used only when desperate this year. Holgate is capable.” – Tez (April 9, 16:22)

Other supporters did chime in with their views, too.

“Nice swansong for him on Sunday. For how much we paid he has been a great servant. I wouldn’t like to see him stay next season though unless he is basically doing it free of charge, or perhaps he can stay on and we can help him do his coaching badges and in worst case scenarios we can always call him back in.” – The Binman Chronicles (April 9, 18:05)

“He’s dead right though mate. You don’t offer your club captain and one of your most capped ever England internationals a new contract on £50k a week less than he was on, it’s an insult. A new contract, which wasn’t £50k a week less, wouldn’t be good value, so I don’t think he’ll get one.” – Lanolin (April 9, 20:15)

“No club with ambition would even consider offering an extension to two veterans who are bit part players. If Marcel Brands allows either one of Leighton Baines or Jagielka to stay on we can read an awful lot from that about the DoF.” – Davek (April 9, 20:26)

“Let’s be honest Jags should have been punted 12months ago along with Baines I can’t believe 12 months on people are discussing given them new contracts, come on boys please.” – BillysBingham (April 9, 19:29)