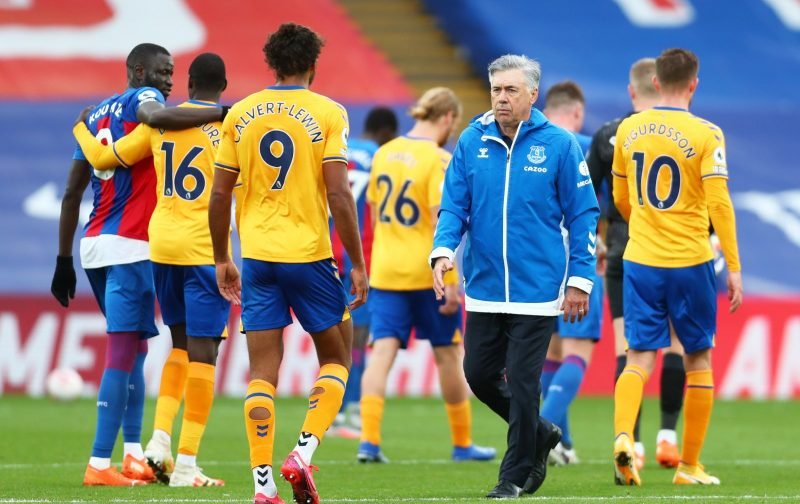 Everton make their return to Premier League action on Monday night after a three-week break, with Crystal Palace the visitors to Goodison Park.

Although the Toffees have lost their last three matches in all competitions, they go into this contest still well in the mix for European places. Their continental aspirations were enhanced by losses for Chelsea and Arsenal over the weekend, while Tottenham Hotspur also dropped points at Newcastle.

Victory for Everton on Monday would move them to within a couple of points of Chelsea in fourth, with a game in hand to play too.

Winning at Goodison has been a big struggle for Carlo Ancelotti’s team this season though. They’ve been beaten seven times on home soil in the 2020-21 Premier League, meaning Crystal Palace will be confident of causing some problems on Monday night.

A tricky and tense encounter looks to be on the cards on Merseyside as a result. Here is how Everton look set to line up:

Everton have struggled to unpick deep-sitting defences in recent weeks, leaving supporters lamenting a lack of creativity in the team. Rodriguez’s return should be the antidote for that.

The Colombian has not played for the Toffees since their win over Liverpool in the Merseyside derby in February. That night, his perfectly-weighted pass released Richarlison, who gave Everton a crucial early lead.

It’s that kind inspiration that Everton will need against a Palace team that are renowned for their defensive cohesion and aggression.

Everton have rushed Rodriguez back into the team at times this term when there’s been a sense of him not being fully fit. In recent weeks it feels like they’ve given him time to recover fully and Ancelotti will hope to see the benefit of that patience in the final 10 games of the season.