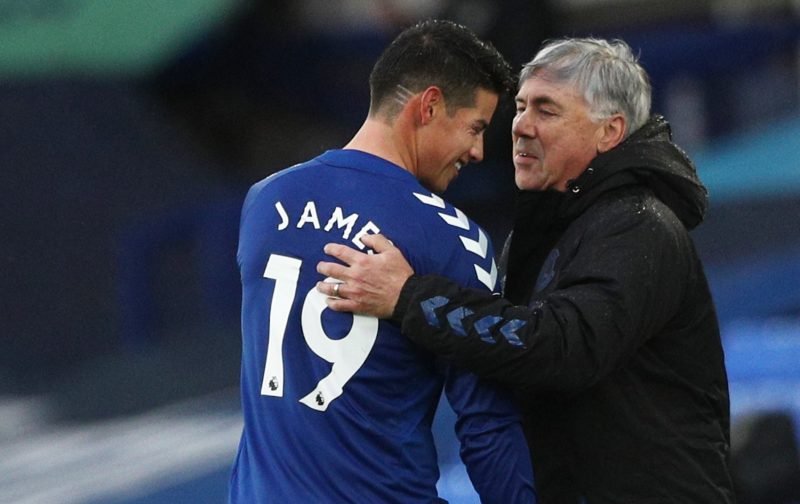 James Rodriguez has conceded that Carlo Ancelotti’s position as Everton manager was the primary reason for him joining the club.

The Colombian made a shock move to Merseyside in the summer and despite enduring some injury issues throughout his debut Premier League season, he has sparkled when on the field for the Toffees in the main.

Speaking to ESPN Colombia, he opened up on his first year with Everton and the reason he made the move from Real Madrid.

“…I started to get to know the club, how they work, how they want to work, win things, play in Europe. The fact that Carlo is here was fundamental to come, where I am learning every day.

“In these remaining nine [league] matches, I want to perform well, I had some physical problems for a month, but I have overcome them and it’s my goal to get a European spot, hopefully in Champions League”

Bevvies, Beatles and (Liver) Birds. It's time to put our Colombians to the test at all things 𝐒𝐂𝐎𝐔𝐒𝐄! 🤣

Rodriguez has not featured for Everton since February, when he played a key role in the team’s first Merseyside derby win over Liverpool in 11 years, setting up the opening goal in a 2-0 win. After returning to training during the international break, he’s expected to feature in Monday’s clash with Crystal Palace.

The comments are a huge indicator of the kind of pulling power Ancelotti has. While Rodriguez is no longer the player who lit up the World Cup in 2014, he still possesses world-class ability and would have had plenty of suitors in the game.

Ahead of what promises to be another important summer for the Toffees in the transfer market, Rodriguez’s remarks are another stark reminder of the esteem the Italian coach is held in.

Of course, that doesn’t mean Everton can go and cherry pick the best players on the market this summer. But if they are in competition with other clubs of similar stature for a particular signing, Ancelotti and now Rodriguez represent impressive trump cards to play.