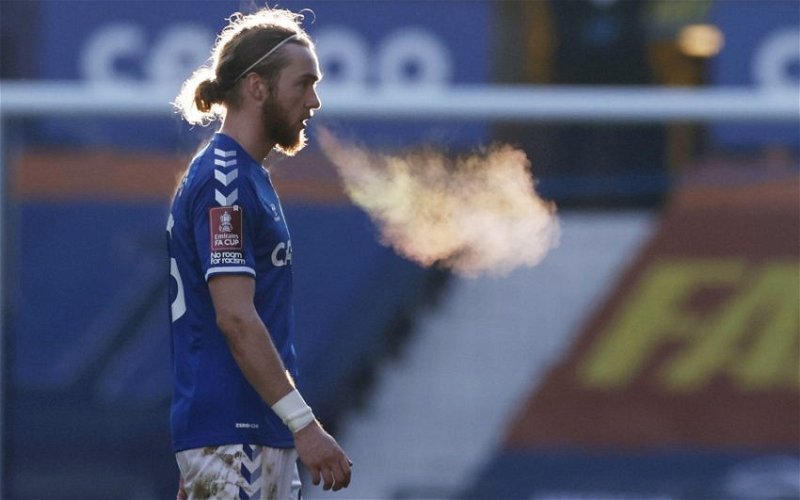 There’s no doubt Tom Davies has been one of the success stories of Everton’s season.

Ahead of the current campaign, the general consensus within the fanbase was that a loan was required in order for the young midfielder to play regular football and develop. After a swashbuckling start to his time at senior level, his progress had stalled.

Yet despite the high-profile midfield acquisitions of Abdoulaye Doucoure and Allan last summer, Davies remained at the club. In the end it was a shrewd move, with the academy graduate stepping in for some key games and cutting the figure of a more rounded and mature footballer having worked with Carlo Ancelotti for more than a year now.

Perhaps it’s no surprise that in a recent interview with the Liverpool Echo, Davide Ancelotti—Carlo’s son and the first-team assistant manager—named Davies as the most improved player in the squad this season.

“I think he has improved a lot, the way he is able to play under pressure, the personality he shows when he is on the ball, when he is defending, how he helps the other,” he said. “…His progression has been really good.”

As encouraging as that progression has been, there will be an onus on the 22-year-old to continue building that form in the final 10 games of the Premier League season.

Doucoure’s injury before the international break represented a major blow to Everton, as he’s been the lungs of the team since arriving on Merseyside; he’ll likely miss the rest of the campaign. Allan is also only just finding his way back to fitness after a substantial layoff.

It means that Davies will be depended on a lot by his manager in some crucial games and the youngster will need to replicate the types of displays he put in in the 3-3 draw against Manchester United and 2-0 win over Liverpool at Anfield earlier this year.

From a personal perspective, Davies will also be well aware of Everton’s ambitions and it’s anticipated the club will spend big again in the summer to give Ancelotti the best chance of turning this team into top-four contenders on a consistent basis. Midfield, particularly defensive midfield, is an area they may look at.

Davies will be want to be part of this potentially exciting journey for the football club. Helping Everton secure European football this season and establishing himself in the first XI on a consistent basis is the best way of making that next step.