Moise Kean Transfer Battle Would be Good News for Everton 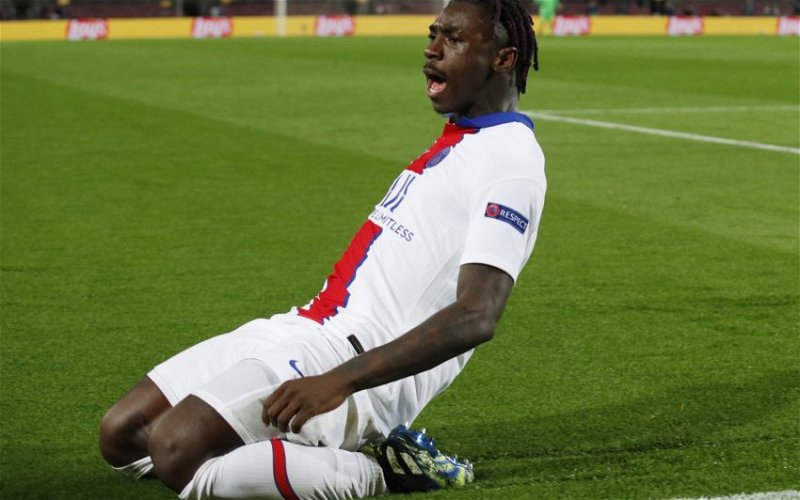 Juventus are reportedly interested in bringing Moise Kean back to the club from Everton, paving the way for a possible scrap for his signature in the coming months.

According to Tuttosport (h/t Sport Witness), the Italian giants are considering a revamp of their forward line at the end of the campaign, as they chase a number of goalscoring options to complement the likes of Cristiano Ronaldo.

Kean, who joined Everton from Juventus in the summer of 2019, is said to be one of those.

The Italy international has spent the 2020-21 season on loan with Paris Saint-Germain from Everton, rubbing shoulders with the likes of Neymar and Kylian Mbappe. Kean has impressed in the main too, filling in well for the injured Mauro Icardi and grabbing 17 goals in all competitions, including one against Barcelona in a 4-1 win in the UEFA Champions League.

"A massive goal at a big moment for Paris Saint-Germain."

These displays are in stark contract to the form he showed at Everton. While the former Juventus man impressed in glimpses n royal blue, he struggled for consistency in his first year on Merseyside and only netted two Premie League goals.

Kean’s form in France would have certainly given Everton food for thought and perhaps a manager of Carlo Ancelotti’s stature would be able to get a tune out of him again when his loan spell with PSG ends. The prospect of an in-form Kean alongside Dominic Calvert-Lewin and Richarlison in attack is an exciting one to consider for Evertonians too.

However, at this point the general consensus seems to be that the Toffees would be happy to move the 21-year-old on for the right price, especially if they could make a profit on the £25 million they spent to secure his signature a couple of years ago.

And with two of European football’s biggest names reported to be keen on signing Kean on a permanent basis, the market value for the youngster is only likely to rise.