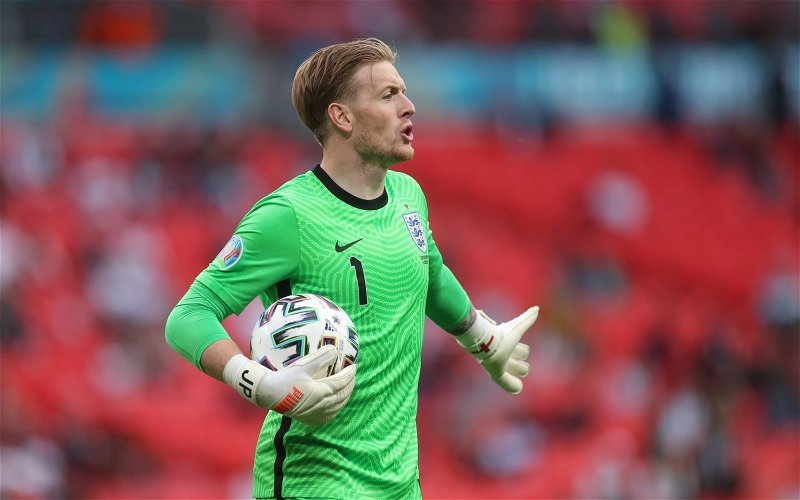 While England continue to underwhelm in attack at the European Championships, their defensive displays have offered the team a strong foundation to build on for the knockout stages of the competition.

Everton goalkeeper Jordan Pickford has been a crucial part of the team being so mean at the back, making some important saves in the games against Croatia, Scotland and the Czech Republic.

The 1-0 win against the latter at Wembley on Tuesday made it clean sheets for the Three Lions in all three of their group games so far.

After the match it emerged that this is only the second time ever that England have done that at a major tournament. The last time it happened was when Gordon Banks was between the sticks in 1966, when England won their only World Cup crown.

🦁 | @JPickford1 has become only the second @England goalkeeper to secure three clean sheets in the group stage of a major tournament.

Jordan Pickford has kept a clean sheet in 10 of his last 16 games for club and country. #EFC #ENG

Pickford and the current crop have a long way to go before they reach those levels, but given there was so much concern about the Everton goalkeeper and the defence ahead of him before the tournament started, manager Gareth Southgate will be content with the way in which the team has shut out the opposition.

Although England have played with caution at the competition so far, Pickford has been a key part of the strong defence.

In addition to the saves he’s made, the Everton man has dealt with set-pieces into dangerous areas, has been fast off his line and has been able to help alleviate pressure with some smart distribution too.

Lots of Pickford for England/Pickford for Everton memes. Again, he has been performing at this level for much of 2021

Bigger tests are to come for England in the next round, with France, Portugal or Germany poised to visit Wembley in the last-16. With the likes of Cristiano Ronaldo, Kylian Mbappe and Serge Gnabry potentially spearheading those attacks, the Three Lions will be up against a different gear of attacker.

But Pickford, who has been in excellent form for club and country in 2021, has prepared for that challenge in the best way possible.