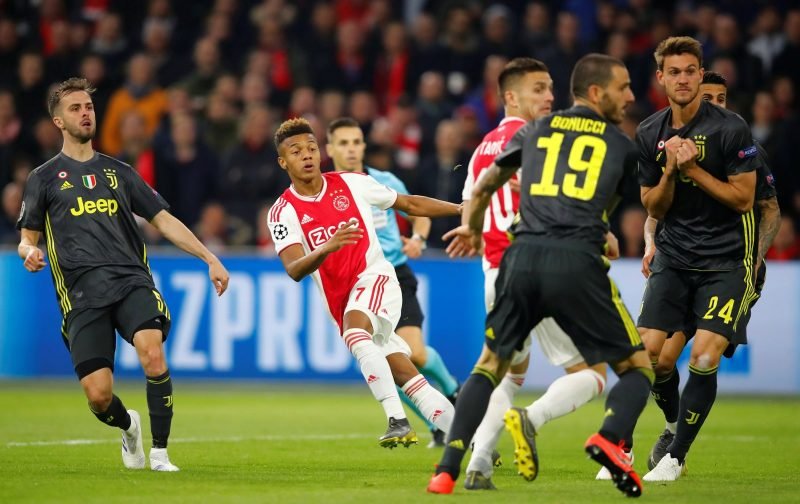 We may not be in the Champions League this season, but one man who has been linked with a move to Goodison Park was in action for his side in Europe’s premier club competition on Wednesday night.

That man being the highly-rated, and highly-priced, David Neres, who took on Juventus from the left of Ajax’s midfield at the Johan Cruijff Arena.

The 22-year-old even scored his side’s only goal of the night (as pictured above) to ensure de Godenzonen travel to Turin with a foot still in the tie, having fallen behind when Cristiano Ronaldo scored the Italian outfit’s opener just before the break.

Neres also completed 93% of his 44 passes against the Old Lady, two of which were deemed key by WhoScored. Moreover, the Brazilian registered a 100% dribble completion rate, won half of his tackles, and enjoyed more time in possession than all but two of Juventus’ players.

Scoring his side’s 17th goal of the competition brought his continental tally for the term to two, while taking his overall record for the season to 11, with ten assists.

Hopefully his efforts do not affect Ajax’s valuation, as there have already been reports that they consider his signature to be worth upwards of €45million (£38.7m), while Borussia Dortmund are said to have tabled €40m (£34.5m) for the stunning prospect.

When Everton fans saw Neres’ performance against the reigning Serie A champions, this is how some reacted…

Neres just adding a few bob to his fee. Like Jovic, Everton just wont be at a high enough level to interest him.