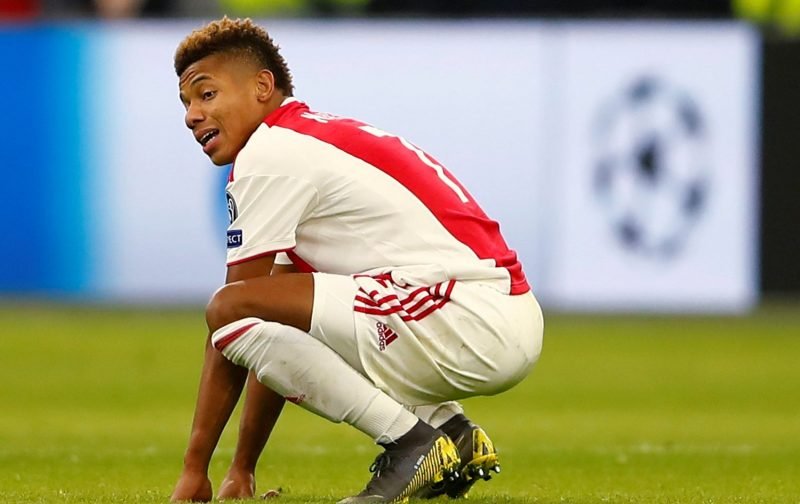 Marcel Brands has shown in the case of Andre Gomes and Kurt Zouma that he will not rush into negotiations to sign one of our top summer targets, but the Dutchman may have to change his approach if we are to chase two Ajax stars.

David Neres and Hakim Ziyech have both emerged as potential targets for the upcoming transfer window, but we are not the leading contender in the case of either, right now.

Le10 Sport are reporting that Borussia Dortmund have reached out to Ajax recently, and placed a €40million (£34.5m) offer on the table for Neres. This supports the claims UOL Esporte made when we were linked to the Brazilian, as they cited information that the Bundesliga outfit were interested in the winger.

What differs from UOL’s report, however, is that the Brazilian outlet claimed Paris Saint-Germain had already consulted Ajax about the forward’s situation, which Le10 Sport counter.

The French publication believe PSG do have recruiters actively monitoring Neres’ development in the Eredivisie as part of their attacking shortlist, but currently have not made any official communication or placed any concrete offers for the 22-year-old.

If Le10 Sport’s report is true, and BVB had placed an offer for Neres, it would signal a double setback to our speculated interests, as Sport in Germany recently claimed that the Westfalenstadion natives have shown their willingness to win by also making a move for Ziyech.

The tug of war to take the Moroccan out of Amsterdam is understood to be between multiple sides, with Chelsea, Arsenal, Bayern Munch, Real Madrid, AS Roma, and us, all said to be keeping an eye on the 26-year-old.

Like Dortmund, Bayern are understood to have reached out to Ajax regarding Ziyech’s availability but without placing an official offer, and Sport note that the chances of the 23-cap ace landing in the Bundesliga are still open thanks to the interest shown elsewhere.

How much a move for the winger come central attacking mid would set the winning part back is also unknown, however sums between €35m (£30m) and €50millon (£43.1m) are under discussion.

So far this season, both Ziyech and Neres have been in sublime form for Ajax across all competitions.

Ziyech has featured in 39 games this term, scoring 19 and assisting a further 17, while Neres has 11 goals and 15 assists from 43 outings.

Should you wish to run a scouting report of your own on our speculated targets, the pair will likely feature for Ajax on Wednesday night, when de Godenzonen face Juventus in the Champions League.