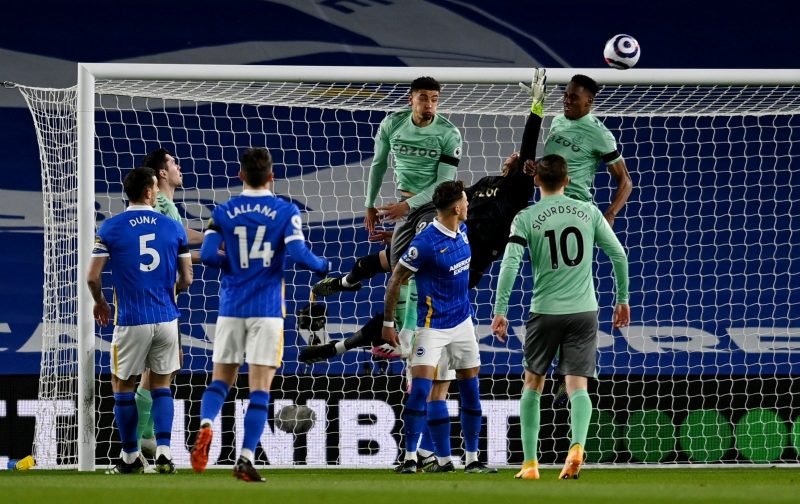 Everton’s squad was already down to the bare bones when they took to the field to face Brighton & Hove Albion at the Amex Stadium on Monday. The problem suffered by Yerry Mina late in the game added to those woes.

The centre-back immediately signalled that he needed to come off after making a sliding challenge in the second half, with Alex Iwobi coming on to replace him.

Thankfully for Everton, the defence was able to hold out without Mina, grinding their way to a 0-0 draw with the Seagulls. However, the potential loss of the Colombian for a couple of weeks is another major blow to a squad that’s been depleted by injuries as of late.

“Yerry Mina had a muscle problem on his abductor,” said Everton manager Carlo Ancelotti after the final whistle, per Sam Carroll of the Liverpool Echo. “I think he will not be available for a few weeks.”

"It’s a muscle problem and that would usually be two-three weeks, but I am not a doctor. He will not be available for Friday." pic.twitter.com/UTupurs81n

Mina’s time at Everton has been frequently punctured by injury issues, although this term he’s been much more consistent in terms of his overall availability. With that in mind, it’s no surprise that he’s played his best football for the club in 2020-21.

While centre-back is probably Everton’s strongest area of the squad—Michael Keane, Ben Godfrey and Mason Holgate have all had fine seasons—Mina has definitely edged his way towards the top of the pecking order in that position.

Not only is he physically dominant, but the former Barcelona man is a vocal presence, colossal in the air and comfortable in possession. At the the heart of a three-man defence he’s been particularly good as of late.

While Everton have areas of the squad that have been more decimated by injuries than the defence, with Harry Kane and Tottenham Hotspur rocking up at Goodison Park on Friday for a crucial game it’s hard to shake the feeling that Mina will be huge miss.