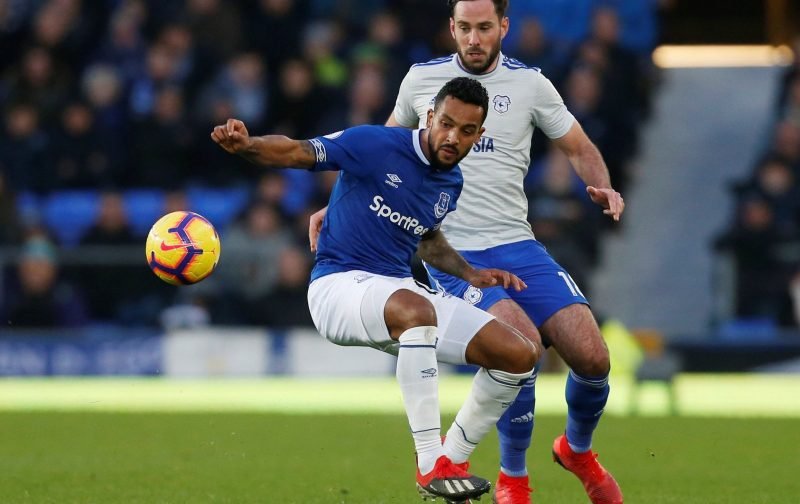 Everton continued their fine run of form with a 1-0 victory over Cardiff City on Saturday, where Gylfi Sigurdsson scored the only goal of the game.

The win means that the Toffees have suffered just one defeat in their past seven Premier League matches under the guidance of Marco Silva, who has got the positivity flowing around Goodison Park once more.

Silva inherited a strong squad on Merseyside and he bolstered his ranks significantly in the summer window by drafting in the likes of Richarlison, Andre Gomes, Bernard, Lucas Digne and Yerry Mina – although fans are still calling for further changes.

Theo Walcott, signed by former manager Sam Allardyce in the January window this year, has been a mainstay in Silva’s side so far this season but many supporters are growing increasingly frustrated with the former Arsenal man.

After starting the campaign in good form, the 29-year-old has now failed to contribute a goal or an assist since the start of October and he found himself subject to further criticism from supporters on social media this weekend.

We have gathered some of their comments below.

Got to start next weekend.We have carried Walcott for most of the season #fatscamsigning

Wouldn't be surprised if Walcott is benched next game #EFC

I wonder how bad Walcott has to be to get dropped.

Walcott should never start ahead of Lookman again

Ademola Lookman did more in 15 minutes than Theo Walcott done in the 75.
Lookman a cert to start in next weekend's derby.