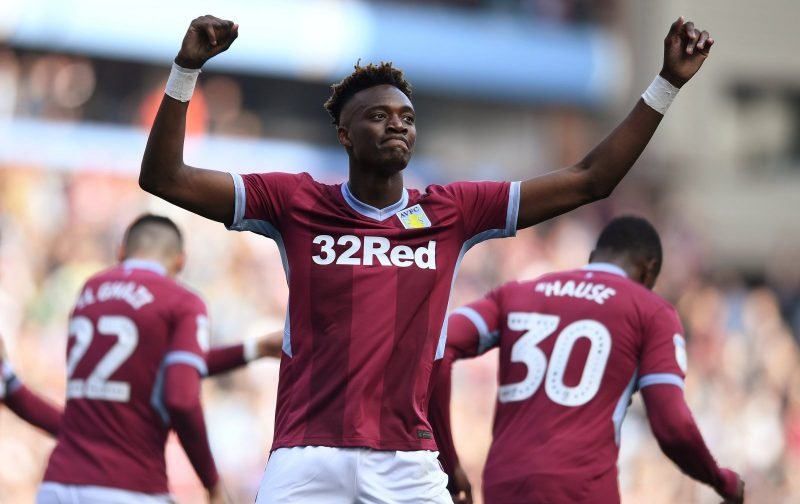 Former Leeds United and Middlesbrough striker Noel Whelan has bizarrely claimed that Everton aren’t a big enough club for Tammy Abraham, given the recent speculation linking us with a possible move for the striker during the summer transfer window.

The young Chelsea attacker has already proven himself more than capable of banging in the goals in the Championship owing to his spells with Bristol City previously and, in this campaign, with Aston Villa, but it’s not unfair to say he hasn’t yet proven himself in the Premier League.

His spell with Swansea City wasn’t great and he didn’t find the back of the net as often as many thought, but with him back on fire this year (25 goals) the rumour mill has already started linking him with a few top flight clubs.

Speaking to Football Insider at the end of last week, Whelan claimed he was ‘too good for Everton’ and presumably thinks the 21-year-old would walk into the sides in the top six.

“He is too good for Everton. No disrespect to Everton, who are a great club but the way Tammy is playing he could be in the Chelsea team or that of another top club. There will be changes at Chelsea this summer. I doubt Eden Hazard will stay and they surely can’t overlook Tammy Abraham. They have to give him an opportunity. Surely they can’t do another Lukuku? If I was the manager I would say, ‘let’s give him a really good chance to show what he’s got’. He’s a really special player, no doubt about that.”

Saying ‘no disrespect’ doesn’t absolve him of the comment and Chelsea have systematically shown they fail to develop their own products, so what makes him think that would change? Other clubs, unless anything dramatic happens, already have their favoured Number 9’s in place – the spot at Everton is wide open for somebody to claim and although Abraham has to work on his overall game and prove he can hack it in the top flight, why wouldn’t think he can achieve legendary status at Goodison.