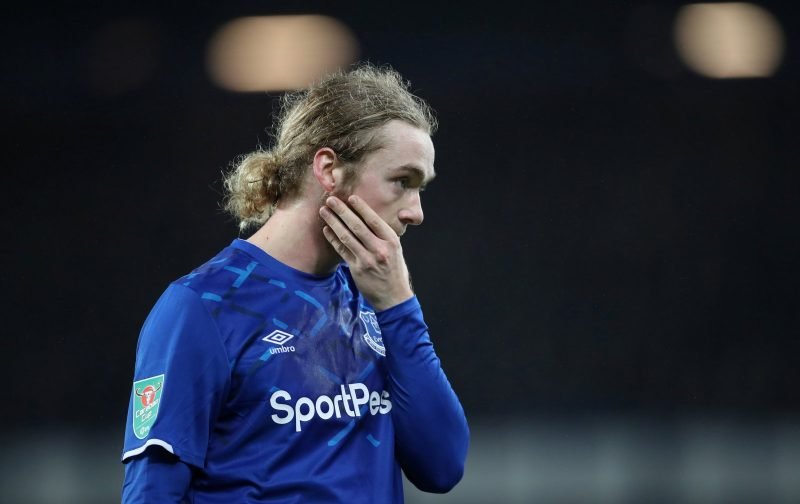 A few Everton fans have been reacting on social media after Tom Davies thanked the Goodison Park faithful for their support during the Carabao Cup Quarter-Final loss to Leicester City on Wednesday night.

Some supporters have praised Davies for his performance in the cup clash, but the £25,000-per-week midfielder feels the first-team’s implementation of caretaker manager Duncan Ferguson’s plans was not at the standard needed during the first-half, and that it ultimately led to a gutting result.

“We are all gutted,” Davies told Everton TV. “I think they set up well against us, but we didn’t start how we wanted to. Second half, we were good and, after getting back into the game, we are disappointed we haven’t gone on to win it.

“The stadium is unbelievable when you get big nights like this. When the goal went in, everyone sensed we could get back into the game. The atmosphere was unbelievable and I’m just gutted for everyone that we haven’t gone through.

“Thanks to the fans for everything they put in there – we are all sorry about not getting into the next round.”

Does Davies retain his place vs Arsenal? 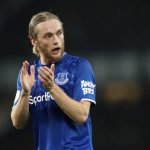 The Foxes stormed into an early two-goal lead on Wednesday night with James Maddison and then Jonny Evans finding a way past Jordan Pickford in the space of three minutes, and only a late fightback inspired by a Davies goal in the 70th-minute took the tie to penalties.

Leicester only took three shots in the first half, as well, despite holding 62.7% of possession, which we managed to reduce to just 47.8% after the break, even though they would fashion a further 10 shots in the second half, per WhoScored data.

We, on the other hand, managed just five shots after the interval and of those, just two were on target, albeit still an improvement on our first half efforts which returned one on-target effort from four shots.

You don’t have to be sorry tom you all fought brilliantly and we couldn’t ask for more that’s what’s most important to every evertonian, if you are going to lose go down fighting, can’t say iam not disappointed not going through but proud of you all. Coyb

Mate, playing like that is all we ask. 2 wks ago I was saying that none of you looked like you cared. So pleased to see home grown players get a chance. Hope new manager continues that belief & Dunc has a senior coaching role that sees him on the touchline alla Arteta at City.

Well played boys, the spirit is on a high, good days are not far off!

We seen fight, thats what we wanted! With a squad riddled with injuries! You’ve all stepped up! Coyb!