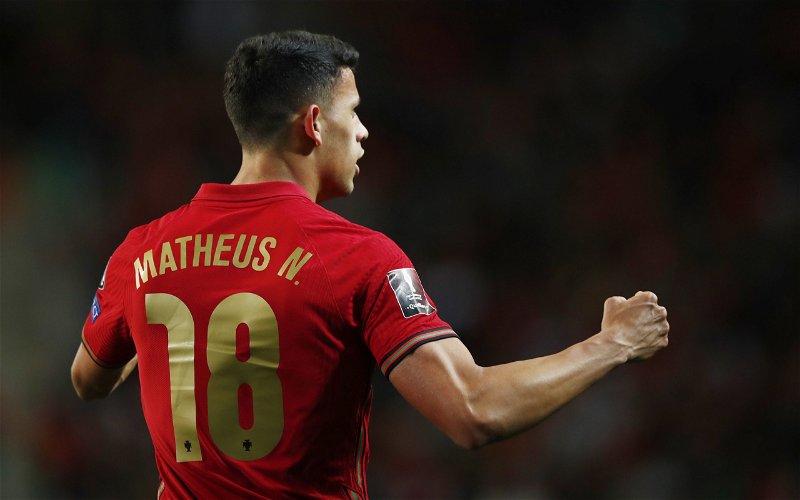 We have still not had the famous “Here we go!” yet, but according to Fabrizio Romano’s tweet, Tarkowski completed his medical last week, and personal terms have been agreed but with Tarkowski still under contract with Burnley, July 1st is probably when we will see the defender holding a blue shirt.

Once Lampard has got his defender, rumours are he will be looking for a central midfielder, and one that has reappeared is last summer’s target. Matheus Nunes.

Last summer, the midfielder was reportedly close to joining Everton according to [SportWitness], but that quickly ended once Carlo Ancelotti left the club.

Everton were heavily linked with a move for the Sporting Lisbon midfielder, but all that changed when Carlo Ancelotti left and Rafa Benitez took over. Speaking in December to a Portuguese outlet Record, Nunes was aware of interest from Everton but no offer was made.

“The only thing that came to me was Everton’s interest but nothing happened as I was on vacation… There was talk of Everton, but in the meantime, I came back and nothing else happened.”

The Brazilian-born midfielder who has represented Portugal 8 times has had a sublime season in Portugal and after Man City played Sporting Lisbon in the Champions League, Pep Guardiola went as far as saying. “Matheus Nunes is one of the best players in the world today” – [TribalFootball]

With such high praise, comes a high price tag, and Nunes has an apparent €60M release clause, which Sporting will not settle for a penny less. Rewind 12 months, and under Carlo Ancelotti, Everton fans were looking forward to a summer of exciting potential transfers, but Ancelotti left for Real Madrid, and in came Rafa Benitez who immediately told the fans that Everton had no money to spend.

12 months on and Nunes is now attracting interest from Newcastle United and Wolves, so Everton will need to act sooner rather than later, and with £75M of players released on a free, Everton still only have a shoe-string budget to play with (thanks to poor recruitment), and with Sporting Lisbon not budging on their asking price, it may well be, sell to buy.

If we can move on the likes of, Yerry Mina, Andre Gomes, Michael Keane, Jean-Philippe Gbamin and any other player Lampard does not see in his plans, would it be wise to spend it all on one player?

*Vital Everton is looking to recruit a new writer for the site. If you can commit to three to five 250 word articles at least three days per week or even on a full time basis email