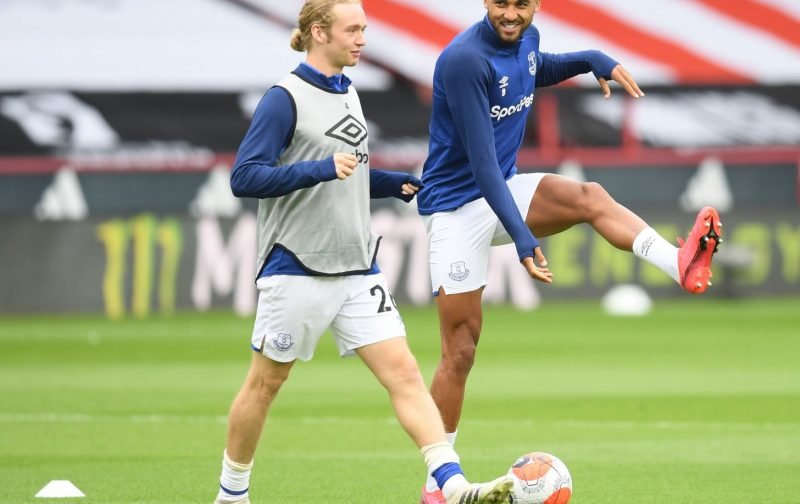 Newcastle are preparing a £12million move for Davies in the summer transfer market as Steve Bruce looks to bolster his Magpies side heading into his second year at the helm, according to the Daily Mail.

Bruce is a ‘big admirer’ of the Liverpool-born midfielder and is thought to have told the Toon hierarchy to make a move to add Davies to his squad, after becoming aware Everton are open to offloading some of their first-team.

Davies has been used regularly by Carlo Ancelotti throughout the Italian’s tenure at Goodison Park, which could make a transfer difficult for Newcastle who only have a limited budget to work with.

But Ancelotti is eying the arrival of a defensive midfielder at Goodison Park this summer after missing out on Pierre-Emile Hojbjerg, and believes improving the role should be a priority amid rumours of an agreement to sign SSC Napoli’s Allan.

Should Everton fail in their hopes of offloading some of their higher earners, Davies’ future on Merseyside may become more clouded and increase the likelihood of a successful move by Newcastle.

Lots of Toffees fans would be open to the potential of Davies’ exit this summer, going by the spate of messages shared on social media.

The 22-year-old has enjoyed 121 first-team fixtures with Everton since graduating from the Blues’ academy, but was only able to score once and failed to assist a goal in 30 top-flight outings in the recently concluded campaign,

Take the money and run https://t.co/7Hde9fzSfn

Too good to be true

Anyone wanna go halves on petty? Drive up there tomorrow

Take it and run

I’ll pull my car round at finch farm Monday morning

Not all Everton fans would be glad to give Bruce the homegrown 5 ft 10 midfielder he covets, as some would prefer to see Brands successfully offload some higher earners so that he is not forced to accept offers for Davies.

Davies only completed fewer accurate passes (681) than Gylfi Sigurdsson (850) and Andre Gomes (721) in the top-flight this term, while playing the fourth-most accurate long balls (49), making the third-most tackles (38) and second-most interceptions (35) and clearances (40).

I’d sell Gylfi and loan him out, get him a years football starting every game https://t.co/OaNgVzCik7

Sigurdsson is one player, in particular, the Goodison Park fanbase would force out the door before opening it for Davies, with many at the end of their wits with the Iceland international.

The 30-year-old, who earns £100,000-per-week, started 28 of his 35 Premier League appearances in 2019/20, in which he scored twice and assisted three goals – a distant shout of the 13 goals, six assists achieved during Marco Silva’s only full campaign at the helm.

Don’t know why people are desperate for him to get sold tbh. He’s no worse than Sigurdsson and Gomes, but he’s on 10% of their wages
Makes a lot more sense to keep him and sell one of those two dossers https://t.co/4fVVcARjJh

To be fair I’d get rid of gylfi before him

Deffo many players I’d have gone before him. Also, I’d add a buy back clause. Never know how he might come one.

Would sell few others before him, but obviously Tom is easier to sell than say Siggy