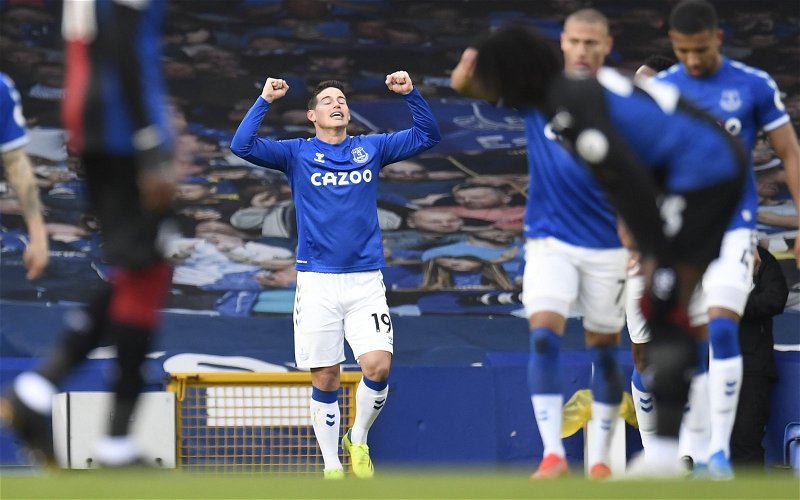 Maybe Evertonians will look back at James Rodriguez’s time at the club in a few years and wonder if it was all a strange fever dream?

Ever since it was confirmed that Carlo Ancelotti had left Everton to rejoin Real Madrid, there have been concerns as to whether or not the Colombia international would follow the coach out the door, such was Ancelotti’s influence on bringing Rodriguez to Merseyside.

According to Colombian football journalist Pipe Sierra, the wheels are now in motion regarding a possible transfer for the player, with Jorge Mendes said to be proposing a transfer of Rodriguez to a number of big names across Europe in a potential €20 million package.

It’s said Rodriguez, who joined Everton on a free transfer last summer, has been offered to Napoli, Atletico Madrid and AC Milan. A possible return to Real Madrid is also mentioned, although the deal would be difficult to do.

Rodriguez was hit by a number of injury issues in his first season at Everton, leaving supporters frustrated at his inconsistent appearances.

When he was on the pitch he tended to shine, adding a creative edge to the Toffees’ play that’s been lacking for a long time. He finished the season with six goals and four assists from 23 starts in the Premier League.

For Everton, it would be a blow to lose Rodriguez. While it’s tough to build a team around the 29-year-old given his conditioning issues, in terms of creativity and control of the ball in the final third, nobody at Everton can match his quality.

Even with him in the squad, the Toffees need to add creativity to the attack, as well as other key personnel in areas like right-back, central midfield and out wide. Finding someone who can fill the potential void left by a Rodriguez departure is another task for the new Everton manager to add to an already substantial to-do list.