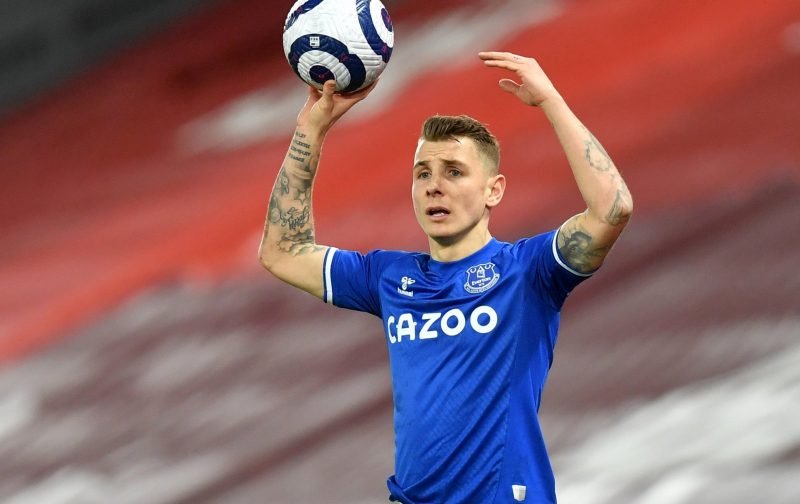 In a campaign where consistency of results and performances have been pretty hard to come by for Everton, Lucas Digne has been a figure of stability once again.

The Frenchman has continued to cement his reputation as one of the best left-backs in the division in what is his fourth full season in English football, chipping in with six assists in the 24 Premier League games he has started.

Early in the season in particular, the full-back’s ability to get forward and deliver pinpoint crosses was to the benefit of the Everton forwards, with Dominic Calvert-Lewin’s goalscoring prowess helped by the quality the of service he received from the left flank. James Rodriguez’s first glance when he picked up possession was always out to Digne too.

While Digne has not been playing poorly in recent weeks by any means, the creativity that was such a vital part of his game earlier in the season has dried up a little.

Of course, Everton’s overall performance levels have contributed to this, as have the fact that Calvert-Lewin and Richarlison have not been the most clinical in front of goal lately. But still, Digne will be aware that when he does get into advanced areas, his crosses have not been quite up to usual standards.

🗨️ | “It was a good result against a good team and now we are closer to our goal and have to reach this. We have to win every game, it is like a final every game and we have to keep this spirit."@LucasDigne shares drivers behind #EFC’s improvement this season…

The hope for the Toffees is that’ll change in recent weeks and there have been some positive indicators for Digne and the team.

Not only will they be boosted by a crucial win at Arsenal last time out, gradually the injury crisis that struck the squad a few weeks ago is easing. If Digne can be part of a stable Everton setup that features Rodriguez, Calvert-Lewin and consistent midfielder ahead of him on the left, that’ll only be to the defender’s benefit.

If he gets that familiarity with players around him and readjusts his radar in the final third a little, then Digne is good enough to be a difference maker for Everton in the dying embers of this campaign, even from left-back.