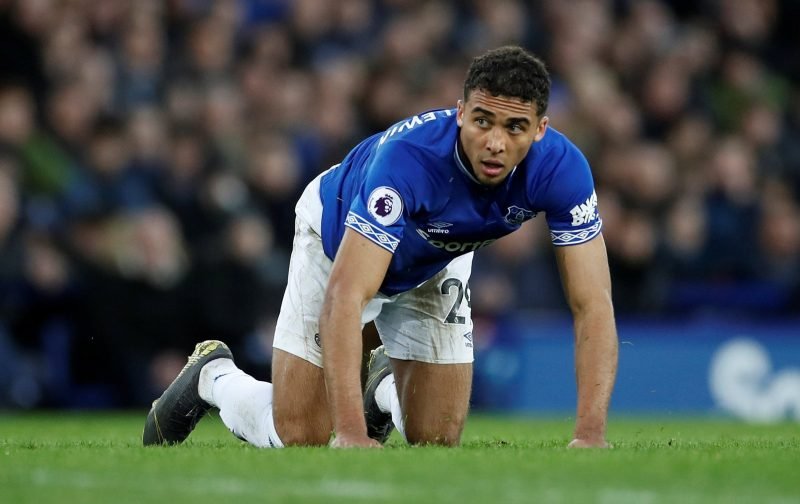 Prominent pundit Danny Mills has told Football Insider that he expects Dominic Calvert-Lewin to have a great Premier League season in 2019/20, providing Everton boss Marco Silva keeps his faith in the often-debated forward.

The England U21 international became the boss’ number one striker toward the end of the recent campaign, having dabbled with Richarlison and Cenk Tosun through the middle.

Richarlison performed admirably at first when tasked with leading the Blues’ assaults, but his efforts as the target man began to decline as his debut Toffees season progressed, before he found his feet once again on the wings to end the term as our joint-leading goalscorer with 13.

Tosun, on the other hand, continued to rarely display his worth in Royal Blue and endured lengthy spells out of the starting XI, while briefly falling behind Oumar Niasse in the Portuguese’s pecking order before the former Senegal striker joined Cardiff City on loan.

It was more a lack of alternatives that resulted in Calvert-Lewin being given the reigns and Silva sticking with it, as the £18million-rated striker would see out the top-flight campaign with one goal in his final nine appearances.

What the Sheffield-born 21-year-old did offer the Blues, however, was someone Gylfi Sigurdsson could feed play off and allow Richarlison and Bernard to enter dangerous positions. Calvert-Lewin also proved a menace in the air, as the 6 ft 1 forward won 5.6 aerial duels per game on average in those final nine outings, and fashioned an average 3.1 shots.

Director of Football Marcel Brands has often emphasised that Everton will only enter the transfer market for a striker if their arrival would not hinder Calvert-Lewin’s development, but loads of fans were quick to share their frustration at West Ham United landing Sebastien Haller as the Frenchman would have walked ‘into our first-team’.

Blues supporters have often debated Calvert-Lewin’s true worth to Everton given the level of his performances in Royal Blue last season, with some dubbing the Sheffield United product a ‘Championship player at best’, while others suggested he ‘lacks quality on the ball’ and questioned if he will ever improve.

Mills, however, is confident the Sheffield-born talent will come good for us, providing Silva stands strong and continues to place his faith in him.

“He’s [Calvert-Lewin] a good player. When you talk to the likes of Ian Wright, they say the most important thing [for a striker] to have is the belief of your manager. When you miss the chance, or don’t have a great game, he goes: ‘Go and score the next one, go and play the next one.’

“Having the backing and the belief of your manager, I think as a centre-forward, is the most important thing. [He] definitely [showed that last season].”