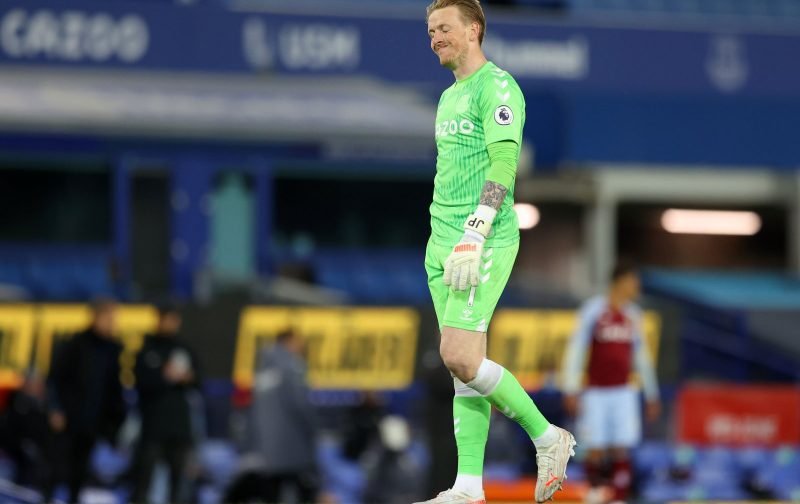 While Everton’s season feels on the brink of fully unravelling, goalkeeper Jordan Pickford is enjoying his best spell of the campaign.

The Toffees were beaten 2-1 at Goodison Park on Saturday by Aston Villa, dealing a huge blow to their hopes of qualifying for a continental competition next season.

While Pickford conceded goals to Ollie Watkins and Anwar El Ghazi either side of half time, had it not been for his efforts in the first 45 minutes then the scoreline might have been a lot healthier for Villa and a lot more embarrassing for Carlo Ancelotti’s team.

It was a performance from Pickford that would’ve impressed the watching England manager Gareth Southgate and one that has continued an encouraging run of consistency for the 27-year-old.

“The England manager was there but it’s about focusing on the job in hand, working hard and doing all I can,” said the stopper afterwards, per the Everton website.

From an England perspective, Pickford does seem to be finding his form at the ideal time, with Burnley’s Nick Pope and Manchester United’s Dean Henderson providing strong competition for the position that’s belonged to the Everton man since the 2018 World Cup.

Although there have been ups and downs aplenty for Pickford in Everton colours, for England he’s rarely let Southgate down and was actually one of their star performers in the run to the semi-finals in Russia three years ago. There’s been little indication that the England boss is considering a change in his starter between the sticks too.

What Evertonians have always craved from Pickford is a little more maturity and a little more focus, qualities that have come to the fore in recent weeks as the team have largely toiled. His brilliant save from Gabriel Martinelli away at Arsenal last week saw the Toffees over the line that day.

With that in mind, there doesn’t appear to be any great need for Southgate to move away from his long-term No. 1 at this summer’s major tournament, especially if Pickford keeps producing as he has done in front of the watching manager.