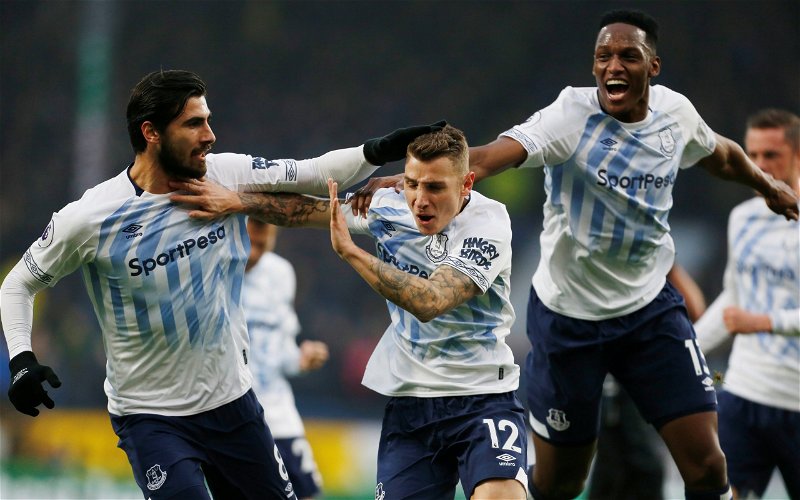 Andre Gomes is one player that Everton are happy to move on this summer if a suitable bid is made according to [GiveMeSport] .

In 2018, Andre Gomes joined Everton on loan from Barcelona, and it was clear to everyone at the time, that Gomes could definitely play. He was elegant on the ball, could pick a pass and was always looking to move the ball forward.

Not only was he a good footballer, but he instantly made a connection with the fans helping raise money for The People’s Place, with a hug-a-thon back in 2019 during his loan spell, and when he signed the dotted line that summer in a £22M transfer he said “It was love at first sight” when he joined and was excited to see what the future held with Everton.

Once his move was made permanent, he suffered a horrific injury in November 2019 when he fractured and dislocated his ankle. Since then, Gomes has not been the same player Everton fans watched during his loan spell, and with football being a business, Everton need to move on players, especially those on big wages that aren’t in Lampard’s first-team plans, like Andre Gomes.

With 2 years still to run his contract, believed to be in the region of 120k p/week [SalarySport] and Everton’s current financial restraints, surely Kevin Thelwell and Frank Lampard should be looking to move on the midfielder if they can find a buyer.

Last season Gomes made less than 20 appearances in all competitions, and with Allan, and Abdoulaye Doucouré both being preferred since Lampard’s arrival, and midfielders constantly being linked with moves to Everton like Jordan Veretout, Harry Winks and Billy Gilmour, now would be the time to try and cash in on Andre Gomes, and for Gomes to try and reignite his career somewhere once again.

Do you think it is time to move Andre Gomes on? Who else do you think Thelwell and Lampard should move on?