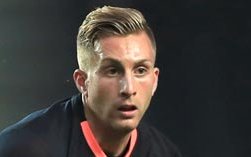 Everton have this evening confirmed our third capture of the summer, Nigerian striker Henry Onyekuru but Gerard Deulofeu is heading back to Barcelona.

The pacy 20 year old comes in for an undisclosed fee from Belgian side Eupen and he has signed a five year deal keeping him at Goodison Park until the summer of 2020.

Last season in the Pro League he was joint top scorer with 22 goals and overall in his two years in Belgium he has averaged a goal every two games, so leaves Eupen with 30 goals in 60 matches.

He made his senior international bow for Nigerian in their game against Togo in June 2017 and he will spend 2017/18 out on loan with Belgium Champions Anderlecht where he will further develop by being involved in their Champions League campaign.

In other news today, Barcelona have took up their buy back clause on winger Gerard Deulofeu and that deal is worth £10.6million for the club.

Having joined the club back in the 2013/14 season on loan, the deal became permanent in 2015 for £4.3million but the 23 year old played only 13 times last term before being loaned out to AC Milan.

They expect the full deal to be confirmed and announced – a two year contract – within the next few days.

Because We Love Football