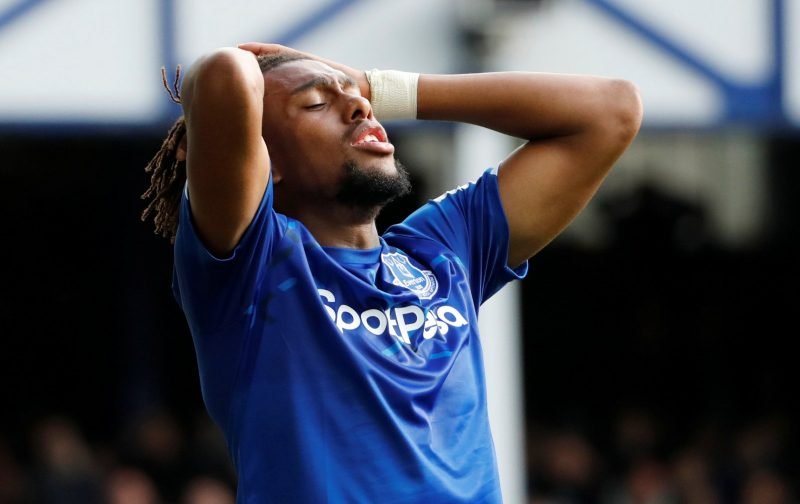 Everton suffered a 1-0 defeat to Tottenham Hotspur on Monday night and Alex Iwobi was one of many players who underperformed. The 24-year-old failed to have a shot on target, didn’t see a lot of the ball and failed to create a chance, so it wasn’t a surprise to see him hauled off at half-time.

Iwobi is not a footballer. #EFC

I don't think I've ever seen Alex Iwobi do anything of note. What is he good at? #EFC #AFC

Called out Iwobi and Sigurdsson game after game . Both been hooked tonight . Don’t play them again . Get rid #EFC

Gylfi and Iwobi have to go, they do nothing, waste of a shirt. Need creativity in midfield in those positions. Also a ball winner in centre mid. And pickford is becoming more of a liability @ToffeeTVEFC #EFC

@GNev2 summed up the feelings of most @Everton fans tonight. Davies, Gylfi, Iwobi simply not good enough and Gomes not having enough influence on games. @MrAncelotti has a massive job this summer #EFC

Alex Iwobi was bought for £28m, rising to £34m. He has made 22 league appearances, 5 coming from the bench and scoring just 1 goal.

For me, he’s been no better than Klaassen and he’s played 3 times the amount of games Klaassen did.

So for me, I’d get rid this summer.#EFC

Still struggling to get my head around the fact #efc paid £80m for Kean and Iwobi.

Against Tottenham, Iwobi played for 45 minutes, had 17 touches, completed 76.9% of his 13 passes and made one clearance. The Nigerian international was a bystander in London and continues to disappoint in his debut season at Goodison Park.

Iwobi joined Everton from Arsenal for £27.3m last summer and has gone on to make 26 appearances in all competitions, scoring two goals with one assist. The 24-year-old still has four more years on his deal, but it’s unlikely he’ll still be at Everton in 2024 if things don’t improve.