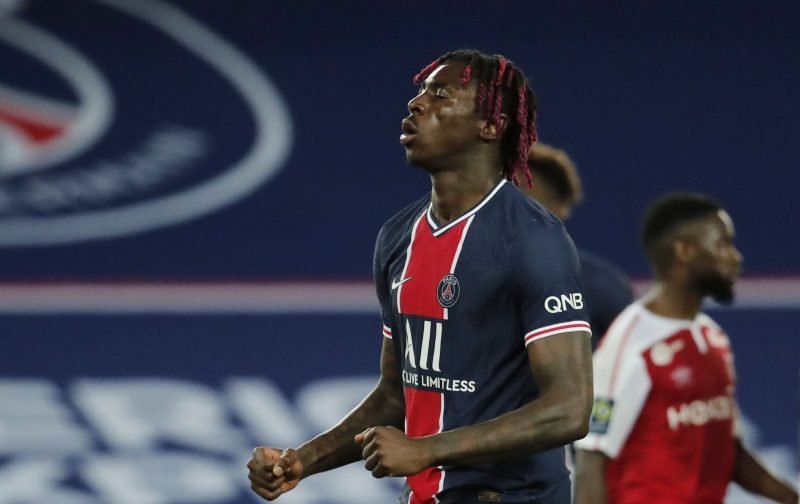 It’s been assumed for a while that Moise Kean doesn’t want to return to Everton when his Paris Saint-Germain loan finishes at the end of the campaign. Now the man himself has confirmed as much.

The Italy international continued his promising year in the French capital on Sunday, keeping PSG’s Ligue 1 title hopes alive with a goal in the 4-0 win over Reims. That took the 21-year-old to 13 goals for the season in the French top flight.

It was PSG’s last home game of the campaign and Kean took to Instagram to reflect on his goal and make it clear he wants to be back in Paris for the 2021-22 term. “Happy to score in the last game at Parc des Princes, hope to see you next season,” it read.

That’s no shock, as Kean is clearly better suited to French football than the Premier League at this point in his career—he netted just two league goals in his first season in England—and has relished linking up with world-class talents like Kylian Mbappe and Neymar.

While Kean was deemed a coup when Everton landed him from Juventus in the summer of 2019, at this point the move looks unlikely to work out from a playing perspective. However, with the Toffees reportedly looking for a whopping €50 million before selling the striker, they could yet make a profit.

From an Everton perspective, it feels important that this deal is boxed off as quickly as possible to start the summer window. Not only because the club would be able to use that significant windfall to improve other areas of the squad.

Manager Carlo Ancelotti has frequently mentioned the fluctuating attitude levels of his players this season and going forward he will want build a squad that is harmonious and united.

While there’s no indication that Kean has a poor mindset, having a player as part of the pre-season squad that’s waiting for a move elsewhere is unlikely to have a positive impact on morale.

In an ideal world, the Toffees will want to conclude their business early in the window, although that’ll be difficult given the pandemic and the fact there are two major tournaments this summer, the Copa America and the European Championships. But selling Kean feels like a straightforward decision that can be done quickly to the benefit of all parties.