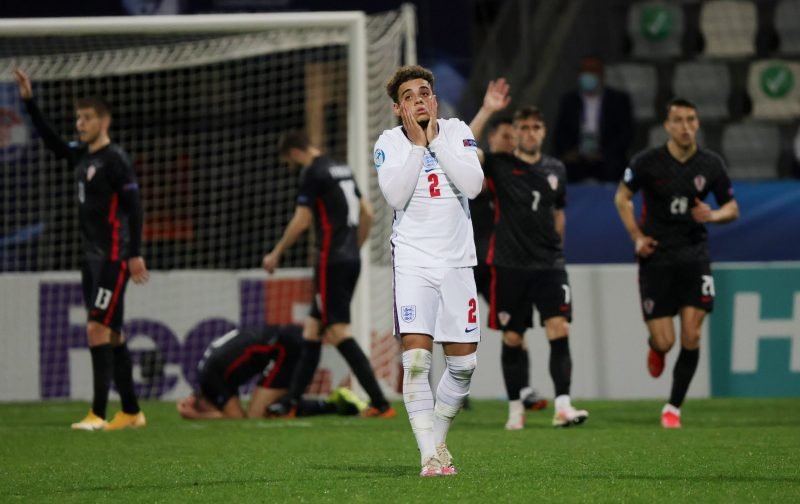 There was heartbreak for England Under-21s on Wednesday night, as they were dumped out of the European Under-21 Championships. But Norwich City right-back and reported Everton transfer target Max Aarons is one of a few in the squad who can hold his head high.

England were on course for qualification after goals from Eberechi Eze and Curtis Jones had given them the two-goal winning margin needed to progress. That was until Domagoj Bradaric’s 91st-minute thuderbolt saw Croatia advance instead.

The fallout to this elimination is set to be significant, with manager Aidy Boothroyd’s position likely to come under major scrutiny.

For some of the young players, this will be a major blow and potentially the end of the road from an international perspective. But Aarons, even with the plethora of high-class options England have at right-back at senior level, looks like someone who will be around the top level for a while yet.

In an England Under-21 team that looked devoid of attacking endeavour or invention over the last three games, Aarons was one player seemingly willing to carry the ball forward and take chances in the opposition final third.

They are traits that will be familiar to Norwich supporters, as the 21-year-old’s vertical surges have been a hallmark of their sparkling attacking play this season. They are streaking clear at the top of the Championship and Aarons will surely be a Premier League player again next term.

Whether that’s with Norwich or potentially at Everton remains to be seen, as Sky Sports recently reported the Toffees’ interest in the wing-back.

The thrust Aarons provides is something Carlo Ancelotti’s side have lacked on the right this season. Mason Holgate is a more defensively-focused player, while veteran Seamus Coleman can not stride up the touchline like he used to.

Aarons would tick a lot of boxes and Everton are unlikely to be discouraged by what they saw from the youngster, even amid a disappointing couple of weeks for the England Under-21 side.