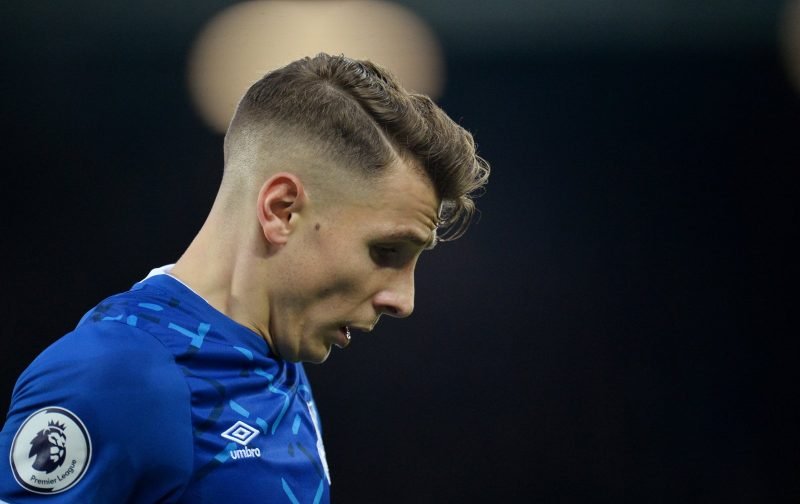 Everton have suffered a major injury blow as Lucas Digne could be out for two months after damaging his ankle ligaments.

The Toffees confirmed on their official website that Digne picked up the injury at USM Finch Farm and will undergo surgery on Monday. The 27-year-old will begin rehabilitation with the club medical staff after that.

Everton didn’t disclose in their statement when Digne could return, but France Football say the French international could be out for two months and thus won’t return until 2021. Bad news.

There isn’t a lot of information on what Digne actually did other than damage his ankle ligaments in training. Paul Joyce of The Times said Everton were awaiting news of the severity of his injury earlier in the week amid fears that he’d need surgery. Unfortunately, he will have to go under the knife.

Digne is expected to be out until the end of January 2021, so his return isn’t likely to come before February. We face Newcastle United January 30 and Leeds United on February 2, so the 27-year-old should be targeting those two games if all goes well with his recovery.

Just Big Thank you for all your messages 💙 I will be back quick as I can 🙏 See you soon in Goodison 🏟 Nil Satis Nisi Optimum 💪🏻 pic.twitter.com/icuuG9sEsu

Who can replace him?

This was the one position we were weak in. If Seamus Coleman was out for the rest of the year, we could call upon Jonjoe Kenny at right-back. At centre-back, we have Michael Keane, Yerry Mina, Mason Holgate, Ben Godfrey and Jarrad Branthwaite. In midfield, we have Allan, Abdoulaye Doucoure, Andre Gomes, Tom Davies, Fabian Delph and Gylfi Sigurdsson. On the wing, we have Richarlison, Alex Iwobi, Bernard, James Rodriguez and Anthony Gordon. And up front, we have Richarlison, Dominic Calvert-Lewin and Cenk Tosun.

At left-back, however, all we have is new-boy Niels Nkounkou who has only amassed 69 minutes of Premier League football since joining from Olympique Marseille over the summer. It’s hard to see Ancelotti throwing him in the deep end for two months, so we may have to use Fabian Delph in the makeshift role. He played at left-back for Manchester City (2015 – 2019) when Benjamin Mendy was injured and fared well, so there’s no reason why he can’t do a job for us.

In other news, could Everton return for Luis Alberto in January? Should they?