Jordan Pickford’s England heroics are no surprise to Evertonians 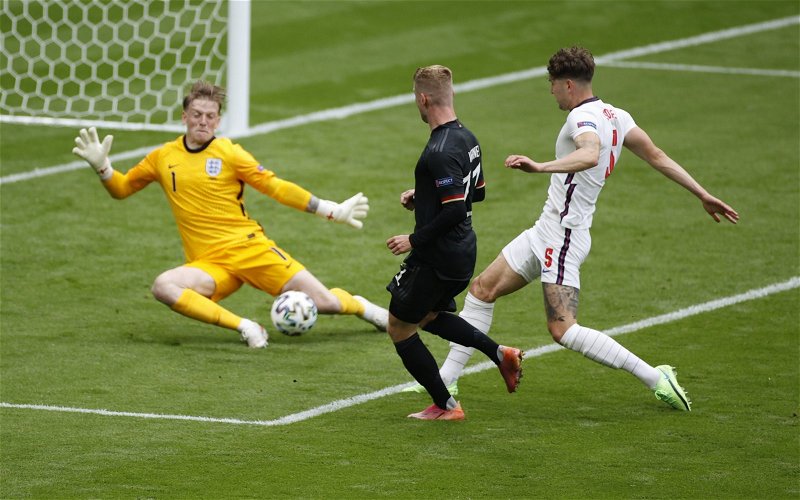 After a historic day at Wembley, when England beat Germany in the knockout stages of a major tournament for the first time since 1966, there were plenty of heroes for the crowd to revere.

Some, like Harry Kane and Raheem Sterling, were perhaps expected to be the toast of a nation at this competition. Others, like Jordan Pickford, may be a little more surprising for the wider footballing world.

Going into European Championships, plenty picked out the Everton goalkeeper as a big weakness in what was an otherwise strong England squad. After all, it wasn’t too long ago that there were serious calls for the likes of Nick Pope or Dean Henderson to get the nod ahead of him.

But Pickford has shown his class at this tournament, helping England to four clean sheets in succession. He enjoyed one of his best games for the national team in Tuesday’s win over Germany.

Either side of half time, the former Sunderland stopper had to be alert to foil Chelsea stars Timo Werner and Kai Havertz, showcasing the razor-sharp reactions and dynamism, two of the biggest strengths of his game.

For some, the way Pickford has played at this tournament will come as a shock, as he’s been perceived as erratic and unreliable at Everton, at times with justification. But those who have been paying closer attention to his form since the turn of the year won’t be surprised.

Since February the goalkeeper has made huge strides. While Everton’s form tailed off towards the end of the domestic season he excelled, showing increased maturity, concentration and making a number of high-quality stops.

It’s clear Pickford relishes the big stage, having shone for England at the World Cup back in 2018 when they made it to the semi-finals, so we shouldn’t be surprised by the nature of his displays this summer. Evertonians will hope that these standards become business as usual going into a vital season for the club.