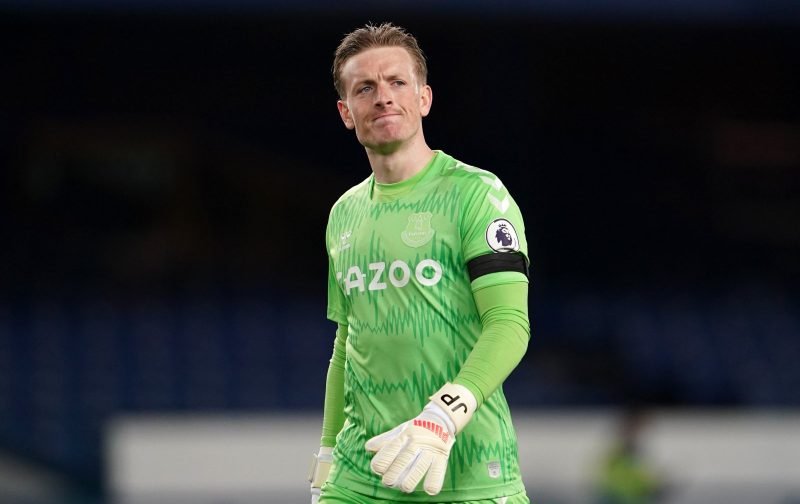 Jordan Pickford’s 2020-21 season has been one of significant peaks and troughs.

For many it will be defined by one moment from a Merseyside derby back in October, although in terms of form there have been some frustrating fluctuations.

Unfortunately for Pickford, those inconsistencies had become standard and midway through the campaign there was a general sense from the Everton fanbase that the team needed a new starting goalkeeper to push on.

And for England, ahead of the 2020 European Championships this summer, maybe a feeling that Burnley’s Nick Pope or Manchester United’s Dean Henderson may represent better options to start between the sticks?

But recently, Pickford is doing what he can to alter those perceptions, with his performance in Everton’s 1-0 win over Arsenal in the Premier League on Friday the latest in a string of encouraging displays.

The England international made a brilliant reaction stop low to his left to keep Everton ahead late in the game, giving them a first win at the Gunners since the 1995-96 season and keeping their hopes of qualifying for European football alive this term too.

Massive performances from Pickford, Godfrey and Holgate there. Displays that have turned one point into three there… #EFC

Turn of the year Jordan Pickford has been a massive player in alot games for Everton now. Big saves! Genuinely can't believe Everton still have a chance of Europe #EFC

While he has suffered with a couple of injury niggles as of late, either side of a small layoff he’s been largely impressive. It’s a run that was sparked by Everton’s other Merseyside derby this season, when Pickford starred to help the Toffees end a barren run at another stadium where they’d long suffered.

Pickford appears calmer in his decision making at moment, keener to detach himself from situations that don’t concern him and is making vital stops for his team too.

As ever with the Everton man, it’s difficult to gauge with any great certainty whether or not Pickford has fully turned a corner and eradicated some of the longstanding problems from his game, or this is simply a strong run of form.

However, at a crunch point in the Premier League season and a time when the competition for England’s starting spot in goal has intensified, Pickford has stepped up.