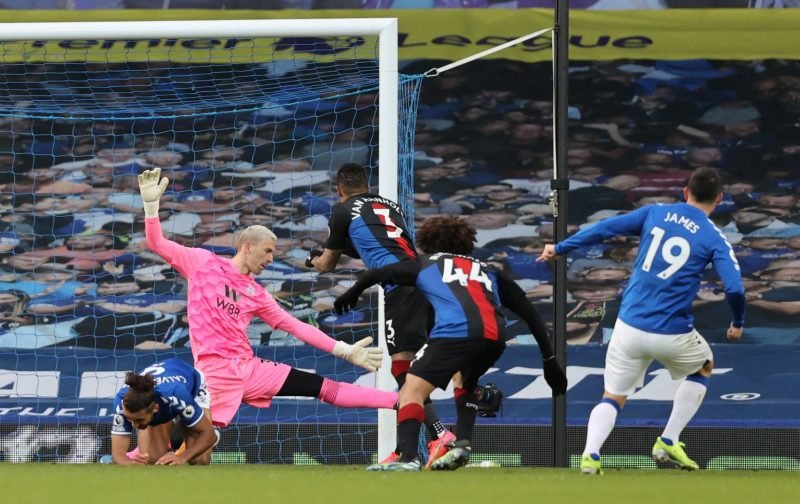 Football feels a lot easier for Everton when James Rodriguez is in the team.

The Colombian international made his much-anticipated return from injury on Monday night against Crystal Palace in the Premier League and scored the opening goal with a precise right-footed effort.

"James Rodriguez is back with a 𝐛𝐚𝐧𝐠" 💥

Rodriguez fires Everton in front against Palace with a clinical finish 👁️🇨🇴

Eventually, it wasn’t enough for Everton to get over the line, as Michy Batshuayi snatched a late equaliser for Palace, with Richarlison and Dominic Calvert-Lewin squandering a number of opportunities for the hosts.

It meant the overall feeling was one of frustration for Everton supporters, as another home game went by without a win and another opportunity to make up ground on rivals for European places was missed.

Nevertheless, this wasn’t a match to file alongside the likes of losses to Burnley, Fulham and Newcastle since the turn of the year, where the Toffees didn’t seem entirely sure on which way they were meant to be shooting. And that was largely down to Rodriguez, who oozed class with every touch.

In addition to his goal, the former Real Madrid and Bayern Munich man was able to weave his magic throughout the contest. Whenever he had possession, the pace of the game seemed to slow and he was able to pop the ball off to team-mates with ease.

It was no surprise that when he did go off with 10 minutes remaining, Everton’s ball retention sharply declined and Palace were able to pin them back consistently for the first time in the game.

The match winner as it stands. ⚽️ pic.twitter.com/iN2TWTPepN

10 – James Rodríguez is the 5th different Colombian player to register at least 10 goal involvements in a single Premier League campaign (6 goals, 4 assists), and the first since Hugo Rodallega in 2010-11. Return. #EVECRY

Of course, Everton require more of their senior players to step up and help them see out matches like this, especially if they are to stay in the hunt for continental qualifications. But it’s hard to shake the feeling that for the remaining nine games of the campaign so much will depend on Rodriguez.

If the Colombian can play in all of them, then the Toffees should be tough to contain from an attacking perspective, provided Richarlison and Calvert-Lewin rid themselves of the uncharacteristic profligacy that was on show on Monday.

With Rodriguez, an injury layoff doesn’t ever really feel far away and that will be a worry at the end of a draining campaign. But if he can go to the well nine more times and drag out the quality he’s shown consistently when available for Everton, a season that’s meandering towards mediocrity could yet be salvaged for the Merseyside club.