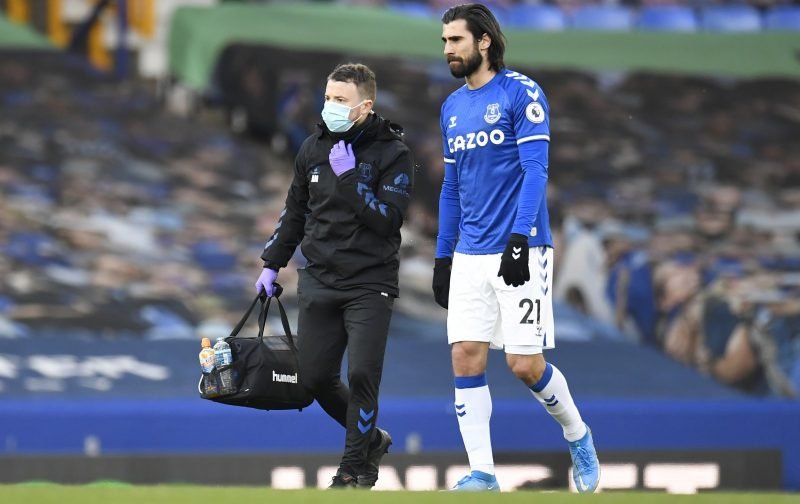 Despite spending a large portion of their available transfer funds on central midfielders in recent summer windows, Everton are down to the bare bones once again in that particular facet of the team.

After 30 minutes of their 1-1 draw with Crystal Palace on Monday in the Premier League, Andre Gomes hobbled out of the contest with a hamstring issue.

“Gomes has a hamstring injury and we will have to check in the next few days,” said manager Carlo Ancelotti afterwards, per Everton’s official website. “I don’t know how long he will be out. It doesn’t seem like a serious problem, it seems a little problem, but we have to check with a scan.”

The Portugal international joins Abdoulaye Doucoure—who looks set to miss the rest of the campaign with a fractured foot—, Allan and Fabian Delph in the Goodison Park treatment room.

It means that aside from Jean-Philippe Gbamin, who made his return to action on Monday night after 597 days and two serious injury layoffs, Tom Davies is the only senior central midfielder who is fit, with both Gylfi Sigurdsson and James Rodriguez preferring to operate as a no. 10.

It’s a major issue for Ancelotti as the team approaches the crunch portion of the campaign and their flimsiness in midfield was on show late in the game against Palace, who were able to snatch a late equaliser through Michy Batshuayi.

When Rodriguez was withdrawn from the action with 10 minutes remaining, Everton’s ability to keep the ball disintegrated, while there was little in terms of a defensive-midfield shield as Palace sought to get back in the game. The Eagles found a lot of space in front of the defence late on, with Jeffrey Schlupp having time to turn and play in the Belgian striker.

Ancelotti will hope the likes of Gomes and Allan can recover quickly, with Brighton & Hove Albion a huge game for the Toffees on Monday, with their European aspirations beginning to dwindle. If they don’t, another night of midfield toil will be on the cards for Everton.