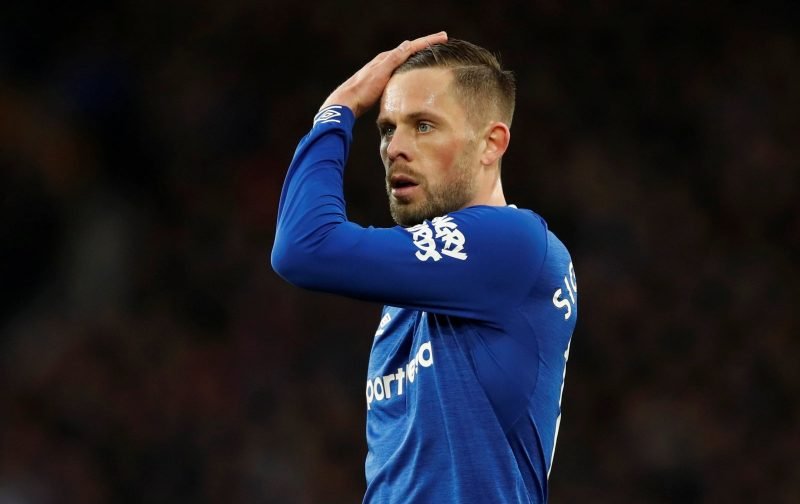 Everton suffered a 1-0 defeat to Liverpool on Sunday and Gylfi Sigurdsson was one of many players criticised by supporters for a poor performance. The 30-year-old started alongside Morgan Schneiderlin in midfield and struggled to make an impact at Anfield.

Sigurdsson didn’t see a lot of the ball, was wasteful when in possession and failed to make a tackle. Carlo Ancelotti eventually lost patience and took the Iceland international off after an hour, replacing him with Fabian Delph. Fans didn’t hold back on social media.

Having said that #EFC central midfield is truly awful. Sigurdsson and Scheiderlin are horrendous #COYB

Complete and utter capitulation from #EFC , embarrassing and inept. Just have to accept we will never, ever win at Anfield again. Schneiderlin, Walcott and Sigurdsson should never pull on the blue shirt again.

What do Sigurdsson and Schneiderlin do in training? Is there something I’m missing? They end up in the first team under every management that comes in and they never offer anything, just ghost through games.#EFC

Against Liverpool, Sigurdsson played for 62 minutes, made 36 touches, created two chances, completed 72% of his 25 passes, whipped in three crosses with 67% accuracy, made two interceptions, drew one foul and made one clearance.

The 30-year-old has made 23 appearances in all competitions this season, scoring and creating three goals. His form has been inconsistent throughout the campaign, but his latest offering at Anfield may be the final straw.

Delph’s return could see him start Everton’s next outing against Brighton & Hove Albion on January 11. The Toffees currently sit 11th in the Premier League table with 25 points from 21 games and could move into the top-half if results go their way.