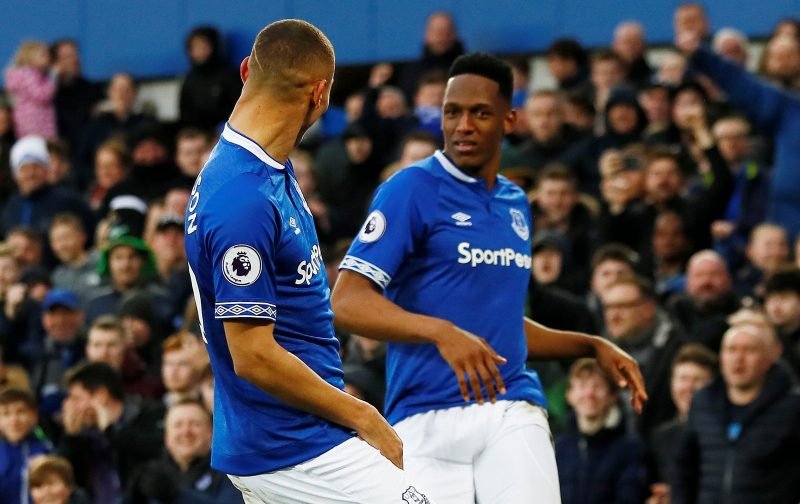 The international break may give Everton a week off the pitch, but Marco Silva faces a selection dilemma when we return to action, and fans have been having their say.

That selection dilemma is whether he sticks with Yerry Mina after his display against Chelsea, or does he recall Kurt Zouma when we face West Ham at the London Stadium.

The French ace could not play against his parent side when we beat the Stamford Bridge outfit on Sunday, and it presented the Colombian the perfect chance to salvage his career.

Mina was not overly tested by the likes of Gonzalo Higuain and Eden Hazard as Maurizio Sarri’s men struggled to get through the gears, but he was still able to record six clearances, a 100% tackle success rate and won his only aerial duel.

Zouma, on the other hand, has been Silva’s go-to guy at the back, but if the Pensioners are not keen on selling him to us in the summer, Mina will be the long-term option at centre-half.

“If Zouma is a non-runner for next season we should stick with Yerry and see what he is all about.” – DiggerDestroyer (March 19, 09:43)

“I really like him. Still only 24 too. Interesting the morons praying he is rubbish to suit their negative agenda have gone very quiet. They’ll be back when he misplaces a pass or misses a tackle though.” – Baines’ Left foot (March 19, 10:23)

“He was awful against Newcastle, if you watch the third goal he’s like a headless yeti and he even takes out one of our own players. So credit when its due he started a little shaky on Sunday but grew into the game and was very good.” – MickNick (March 19, 10:27)

“Not as much fault of his as what’s been said, he was thrown into a rubbish situation. We were already imploding & inviting the pressure, then couldn’t adapt and cope with a formation change.” – Ossie_21 (March 19, 10:45)

“Better positionally, better in the air, better on the ball, stronger in the tackle, more of a threat from set pieces. Better than Zouma in every respect.” – Saint Domingo (March 19, 11:14)

“Very rash and has a lot to learn but raw ability wise he’s our best centre back by a street. People need to get real with their expectations of players. There is a middle ground between “sell him he’s dirge” and “what a player, he’s world class.” – Tez (March 19, 13:12)

“The manager said his attitude in training was a issue which is a bit vague looking at them stupid Everton behind the scenes videos on youtube all the players seem to really like him he embraces all the work in the community stuff if the attitude issue is he is not taking the football side serious with a smile on his face who cares as long as he does the business on matchday give him a run in the team.” – GiantHogweed (March 19, 14:17)