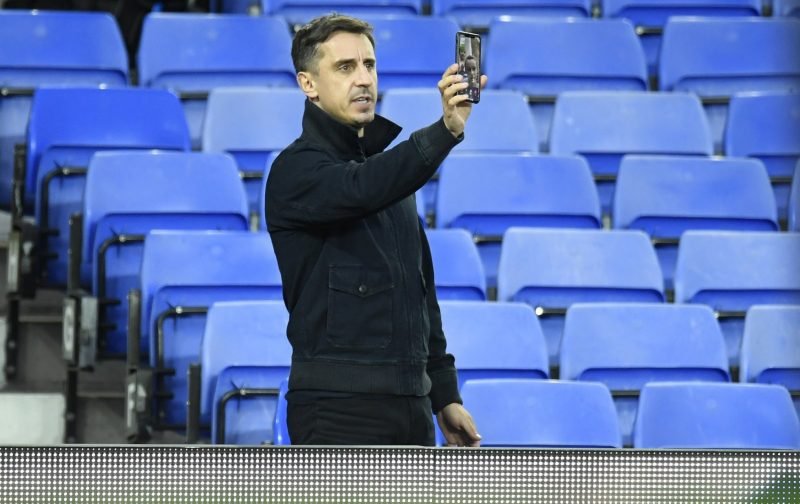 Manchester United legend and Sky Sports pundit Gary Neville has “switched off” from Everton due to the Toffees’ inconsistent form.

Neville was asked where he thought Everton would eventually finish in the Premier League this season during a Twitter Q&A on Friday morning and offered a candid response.

“I’ve switched off on them,” he said. “Annoying me that they keep letting themselves down at key moments.”

I’ve switched off on them. Annoying me that they keep letting themselves down at key moments https://t.co/mvbr9pio4B

The former defender was part of Sky Sports’ punditry team for Everton’s clash with Crystal Palace on Monday.

Carlo Ancelotti’s side had the chance to thrust themselves back into contention for a top-four position in that encounter and took the lead thanks to a precise finish from James Rodriguez. However, Michy Batshuayi grabbed a late equaliser for the visitors after Everton missed a succession of clear chances to extend their lead.

"James Rodriguez is back with a 𝐛𝐚𝐧𝐠" 💥

Rodriguez fires Everton in front against Palace with a clinical finish 👁️🇨🇴

Neville’s frustration at Everton will be shared by Evertonians, as the team have failed to capitalise on a strong start to the campaign and some memorable performances.

At Goodison Park the team has consistently toiled, with just one win at home in the Premier League since December.

Despite that rotten run, Everton are still within touching distance of the top four ahead of the weekend’s matches. West Ham currently occupy fourth spot and the Toffees are just five points behind them with a game in hand.

Ancelotti will want to see his team get back to winning ways on Monday when Everton visit Brighton & Hove Albion. A win would reignite some belief that European football is still achievable for the Toffees, but anything else would add more clout to frustration felt by the likes of Neville and the Everton fans.