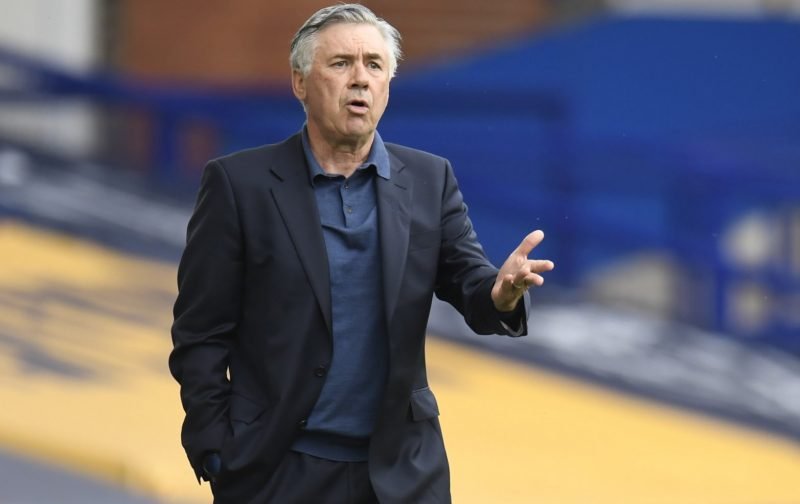 A few Everton fans on social media were left disappointed after the Blues confirmed Carlo Ancelotti’s side will face Blackpool and Blackburn Rovers in behind-closed-doors pre-season friendlies this summer.

Everton will begin their build-up to the 2020/21 campaign with an away day on the seaside, as Ancelotti takes the Toffees to Bloomfield Road on August 22 for a 15:00 kick-off against League One Blackpool.

The Goodison Park outfit last faced Blackpool in a competitive fixture in November 2016 when the two sides met in the Football League Trophy, drawing 1-1 and extending a nine-game unbeaten run for Everton.

Ancelotti will then take the Toffees to Ewood Park on September 1 for an 18:00 kick-off, which will be a rare first visit to the Championship side since Blackburn were last in the Premier League during the 2011/12 season.

Supporters who have already purchased a 2020/21 season ticket will be able to watch Ancelotti’s men take on their lower league opposition via a free online stream, which will also be available for last season’s Hospitality Members and those in the Official Membership scheme.

Some Blues supporters were left disappointed by the club’s announcement confirming that Everton would be returning to Blackpool only for the fixture to be behind-closed-doors, as they feel the pre-season fixture would have been an ‘ideal’ away day for the Toffees fanbase to sink their teeth into after months of watching matches played in front of empty stands.

Blackpool would have been boss tbh https://t.co/89oInzQwqh

The one game I’ve been waiting for since there one season in the prem an we can’t go,Blackpool is hands down the best away on earth 😩😩😩

Blackpool away would’ve been a class day out if games weren’t behind closed doors 😕 https://t.co/rMLgvBC1kb

Would’ve been ideal that, you could’ve made a weekend of it too

Gutted ther, tha blackpool one could have been a belter https://t.co/FpjdHwxPhU

Belter pre seasons they would of been https://t.co/SAJWQXwTDd

Other Everton fans have focused their replies on the last time their side faced Blackburn, having travelled to Ewood Park for a pre-season friendly two years ago only to lose 3-0.

Goals from Darragh Lenihan, Dominic Samuel and Bradley Dack dealt the damage that day, though Dack will likely not be able to repeat his feat with the midfielder targeting a mid-September return from an anterior cruciate ligament injury sustained last December.

Just had a flashback to the other season when Blackburn tonked us in pre-season.

Likely a flashforward too, if we don’t get a few players in ASAP. https://t.co/YgrSlPxcBT

Not falling for this again that last Blackburn friendly was heavyyy https://t.co/h6gtVN7Ozw