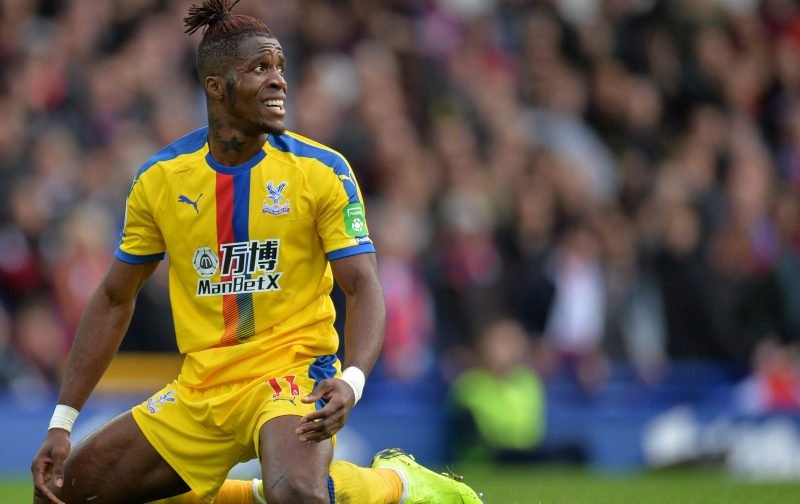 Crystal Palace forward Wilfried Zaha has been ‘hugely’ impressed with Everton’s ambition and wants to join Marco Silva’s squad before the summer window closes, according to Elton Welsby.

Citing a ‘top-class source’, the former TV presenter claimed Zaha has expressed a desire to secure a move to Goodison Park ahead of Thursday’s deadline, with the Blues’ acquisition of Juventus’ rising-star Moise Kean one addition to have particularly caught the Ivorian’s attention.

There had already been claims that Zaha expects to become a Toffee in the current market, after seeing a chance to join Arsenal taken off the table by the Gunners’ club-record purchase of LOSC Lille forward Nicolas Pepe.

But Crystal Palace are still opposed to losing the 26-year-old, and have rejected an improved bid of £70million plus James McCarthy and Cenk Tosun, according to Sky Sports.

The Eagles are looking for no less than £80million for the winger, citing Manchester United’s recent purchase of Leicester City defender Harry Maguire as an indicator to how high they value their prized asset, who is contracted to the South London club until the summer of 2023 (Transfer Centre, August 7, 09:36).

Zaha is understood to be very frustrated in the Selhurst Park side’s decision to reject our latest advance, and has grown disillusioned by the situation he finds himself in on the eve of Deadline Day.

The Ivory Coast international is still training with Palace ahead of our trip to Selhurst Park at the weekend, with his current side categorically telling Everton ‘no’ when offered £70million plus McCarthy and Tosun.

Many Blues supporters are still keen to see Zaha link up with Kean on Merseyside, though.

Here’s how these fans reacted to Welsby’s claim…

If this is true I’d leave a pint in for you down the Johnny pye ????

Think we will get zaha. His agent will eventually realise the clock is ticking and force his client to force the move. That’s how it always works if the player wants it enough and from what Elton is saying that appears to be the case.

Also struggling to see why nearly all the pundits think we are going to finish 7th or 8th. Our recruitment has been far better than any of the teams above us. If we get the right back, Zaha and Zouma/quality CB in then surely we can finish higher than that?

Think Zaha has wanted to sign for a while now. Problem is getting Palace to sell.

Change of heart or not, Palace playing hardball and understandably not wanting to sell their best player. I fear if they do sell, it’ll be for crazy money and I’m not sure he’s worth the £80m to £100m total package I’m hearing. I’d rather be patient and wait for a better player.