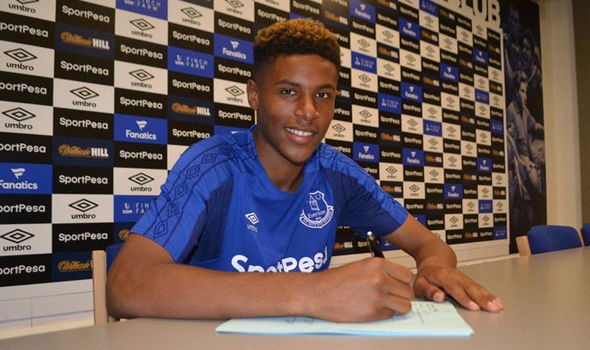 Everton confirm that Nathan Markelo has signed a new deal until 2022. The 21-year-old had an uncertain future at Goodison Park as his deal was up this summer and he had yet to break into the first-team, but Markelo has clearly impressed enough in the U23s to convince Everton that he’s worth keeping beyond 2020.

He said to Everton’s official website: “It feels good for me to sign this contract because it means Everton sees real potential in me. It gives me a lot of confidence. Everton is such a big club and I am so happy I have two more years to show what I can do.

“Everton is one of the biggest clubs in Europe and has big ambitions for the future. For them to show this belief in me means a lot. Since the first minute I joined Everton it felt like a family. Everyone is happy, they take care of you and want the best for you.

“I want to keep improving as a player and as a man and hopefully get my chance in the first team.” A lot of supporters believe he has the potential to be a regular, so they’re delighted that he’s been retained.

Very pleased for both Nathangelo and the club.

Buzzing with this. He’s going to be a star.

Terrific player, proud to have him playing for us…one to watch in the near future!!

At 21 this lad is either seen as a real prospect or as bare bones cover if we can’t bring in the players we need in MF/defence.

Anyone seen much of him to have an opinion?

The £1.5m-rated defender joined Everton from Volendam in 2017 and has gone on to make 59 appearances for the U23s, scoring two goals with four assists. Markelo has been a regular in the reserves, but first-team football has so far alluded him. He’s training with the senior squad since football returned, but there are a lot of players standing in his way of getting opportunities.

At right-back, Seamus Coleman, Djibril Sidibe and Jonjoe Kenny have been preferred. In midfield, Andre Gomes, Jean-Philippe Gbamin, Fabian Delph, Gylfi Sigurdsson and Tom Davies have been preferred too. It therefore remains to be seen whether Carlo Ancelotti will give him the nod in 2020/21.