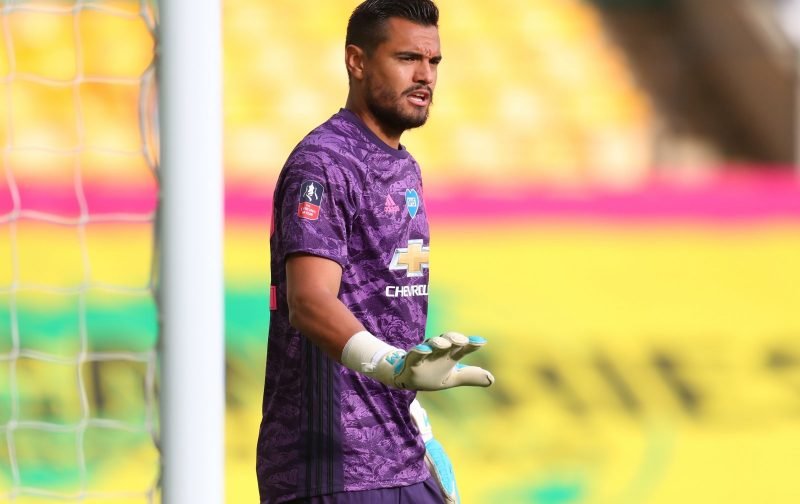 Romero has emerged as a potential target for Everton, with ESPN reporting that the Toffees and newly crowned Championship winners Leeds United are interested in adding the 33-year-old to their ranks.

Everton are looking to bring competition to the club in the summer for undisputed number one shot stopper Jordan Pickford, who has started each of the Blues’ Premier League, Carabao Cup and FA Cup fixtures this season without missing a minute thus far.

Romero has often been left serving as David de Gea’s number two at Old Trafford since moving to England in 2015, with the former AS Monaco ‘keeper only earning 59 outings across all competitions for the Red Devils with a season-best of 18 appearances coming in 2016/17 thanks to the Europa League.

Manchester United boss Ole Gunnar Solskjaer has not awarded Romero any minutes in the Premier League this season, and unexpectedly left the Argentine out of the starting line-up for the FA Cup Semi-Final against Chelsea last week having played in every other round.

Leeds are considering the £2.52m-rated Romero as they look to compile their first Premier League squad since 2004 following their Championship title success.

Everton fans would seemingly be eager to see Director of Football Brands beat Leeds to the punch, as many have been urging the Everton chief to purchase Romero from Manchester United in the summer.

Wanted him before pickford and would still have him as number 1 even at 33. https://t.co/K245FUhmxh

Said he’s class for years! Best number 2 in the prem he would start for us

Be a boss signing that https://t.co/7hrRdwoi70

He’s decent Tbf. I hear a lot of Utd fans calling for him to start.

Solid keeper exactly what we need

For some Everton fans, they would be happy to see Romero move to Goodison Park in the summer at the expense of Pickford, even though club chiefs are only intent on adding competition for the 26-year-old.

Pickford has often left the Goodison Park faithful in utter dismay at his lacklustre performances between the posts, which have seen Everton concede 53 goals in 28 Premier League games having also kept nine clean sheets.

Romero, in contrast, has conceded 26 goals over his 59 appearances for Manchester United, which have featured 38 clean sheets.

I honestly would consider doing a swap deal with the idoit we currently have in goal for Romero https://t.co/K1cScMjb9e

Better than T-rex bring him in