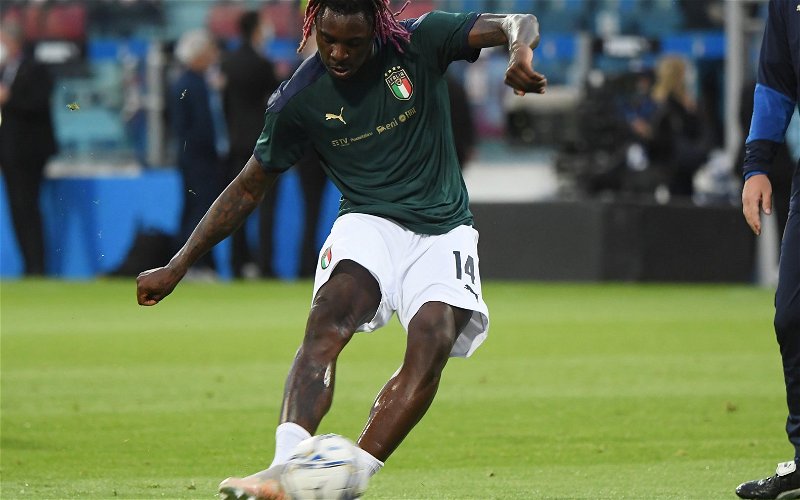 There’s a lot to deal with in the in-tray for new Everton manager Rafael Benitez. The long-term future of Moise Kean is one of the biggest matters.

There was much excitement when the Italian joined from Juventus in the summer of 2019, although he struggled in his first season of Premier League football. He was then shipped out to Paris Saint-Germain on loan last term, where he netted 17 times for the French giants in all competitions.

After impressing with the Ligue 1 club, it was anticipated that PSG would come back in for Kean. According to Fabrizio Romano, that’s set to happen, although they only want another loan deal with an option to buy.

Paris Saint-Germain want Moise Kean back and it’s only loan negotiation with buy option included, as reported one month ago. NO permanent deal bid. 🔵 #PSG

While it appears clear at this stage that Kean sees his future away from Goodison Park, for Everton another loan deal of this ilk makes little sense.

After all, for every season Kean spends away on loan, there’s less and less control the Toffees have over his value. Next term the Italy international may struggle to get a regular starting spot with Kylian Mbappe, Neymar and Mauro Icardi around and goals may dry up, while in the meantime his contract will tick down another season.

PSG are obviously one of the juggernauts of world football from a financial point of view and with the player keen to head back to Paris, they will feel confident of getting what they want out of any deal. But Everton need to be bullish in this situation, especially with the club looking to earn favour from supporters following the controversial appointment of Benitez.

The funds are clearly there for PSG to sign Kean on a permanent basis and Everton should make it clear that that’s the only offer they will accept after loaning him last time. If not, the forward could stay on Merseyside and be part of a squad that was severely lacking in goal threat last term, whether that’s where he wants to be or not.