Cuco Martina has spent the season sidelined with a knee injury but has finally recovered and made a surprising return to the first-team on Sunday. Duncan Ferguson rewarded the 30-year-old with a place in the matchday squad in Everton’s 1-1 draw with Manchester United, but he didn’t come off the bench. 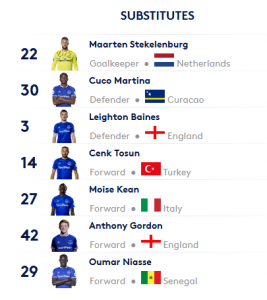 Martina suffered his knee injury in training over the summer and had been making significant progress with his rehabilitation since November. His return is good news for Everton, but it’s highly unlikely that he’ll stay at Goodison Park past 2020 as his contract is up in six months.

The Curacao international has made 28 appearances in all competitions since joining Everton from Southampton in 2017, the last of which came against Burnley (March 3, 2018). Prior to Sunday, Martina hadn’t made the matchday squad in any competition since May 2018 either. He’d been stuck in the u23s.

With Lucas Digne/Leighton Baines for competition at left-back and Djibril Sidibe/Seamus Coleman for competition at right-back, it’s hard to see Martina getting himself back into the starting lineup unless there’s an injury crisis.

And despite his uncertain future, Everton struggled to offload him over the summer, so there’s a chance he has to run his contract down on Merseyside.