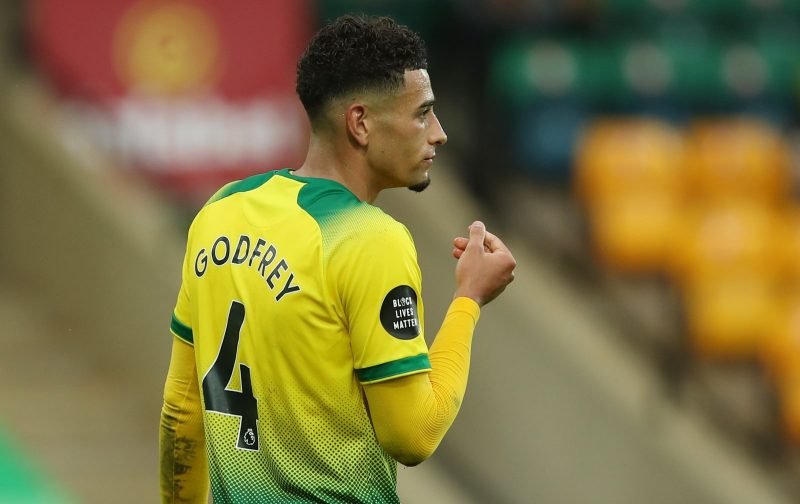 According to the Telegraph, Everton have lodged a bid for Ben Godfrey and are hopeful of bringing him to Goodison Park before the transfer window shuts. Sky Sports’ Transfer Talk say the Canaries have rejected our approach and are holding out for more money than we’ve put up, however, so we’re yet to reach an agreement. Fulham have had a previous bid turned down too.

Godfrey would improve our squad

The 22-year-old has made 78 appearances in all competitions for Norwich City since joining from York City in 2016, scoring five goals with two assists. He’s been a regular for the Canaries since 2018, impressed in the Premier League last season and is one of the best centre-backs in the Championship.

Godfrey is dominant in the air (66/108 aerial duels won in 2019/20), composed in possession (87.9% of 1660 passes completed), seldom relinquishes the ball (dispossessed only four times) (unsuccessful touch 13 made once every 203 minutes), provides an effective shield in front of goal (blocked 45 shots/passes/crosses), doesn’t dive in (one foul 15 given away every 176 minutes) and is adept at one-on-one defending (dribbled past 8 once every 331 minutes).

We’ve needed a defender to replace Phil Jagielka and Ashley Williams who were released last summer too, but it’s been more than a year and we’ve still not managed to strengthen at the back.

The transfer window shuts in four days, so time is running out for us to secure a deal.

In other news, allow me to play devil’s advocate on Moise Kean’s future at Everton