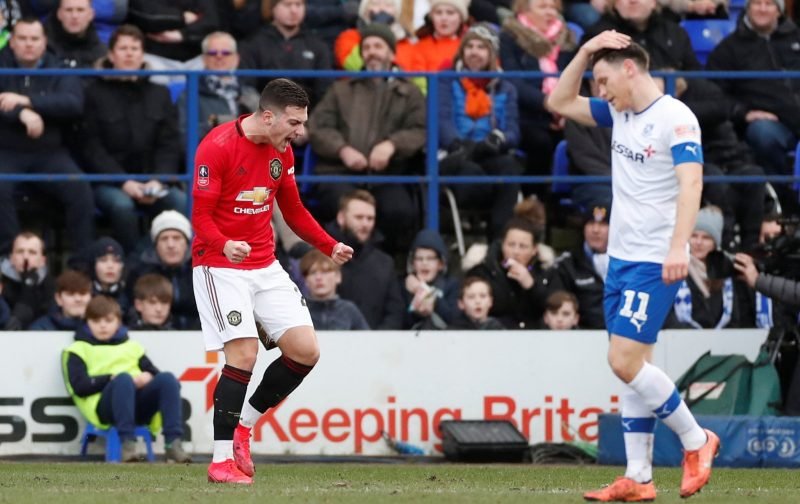 A few Everton fans have been reacting on social media to reports by the Mirror, claiming Carlo Ancelotti is plotting a summer transfer of Manchester United’s Diogo Dalot.

Ancelotti is believed to be searching for the long-term replacement for Seamus Coleman and believes Dalot has the ability to bolster his defensive ranks ahead of next season.

Dalot has often been an outcast at Old Trafford under Ole Gunnar Solskjaer, having made just 19 starts over 28 appearances since the Norwegian replaced Jose Mourinho at the helm in December 2018.

The former Portugal U21 international is fully aware that he faces a battle to turn things around going forward with Aaron Wan-Bissaka the preferred right-back at United, and could be allowed to leave this summer to raise funds for the Red Devils’ own spending.

Any potential move to Goodison Park would still see Dalot serving as the back-up though with a greater chance of becoming the number one, with Coleman now 31 and Ancelotti looking for his future first-choice.

Dalot cost United around £19million when signed during Mourinho’s tenure in charge, though Ancelotti believes the rarely-seen 21-year-old could be snapped up for just over half that given the Red Devils’ desperation for funds.

It is also noted that Dalot could help offer cover at left-back should anything befall Lucas Digne, as the Portuguese full-back has previously played nine senior games in the role, as well as being given minutes at right-midfield, left-midfield and as a second-striker.

Claims of interest in a summer move for Dalot have seen some Everton fans react on social media by supporting any potential bid as a fee in the region of £10m would be almost nothing.

Good player in there definitely. I’d have him for £10 million no probs… great potential.

Heard Dalot about him, supposed to be decent 😆🙈😉

A few Everton fans are doubtful of a potential transfer, however, as they are growing worrisome of how the summer window will develop.

I don’t see us signing anyone .. already 15-20’players linked with us

Other Blues supporters believe a back-up right-back should not yet be a priority for Ancelotti or Director of Football Marcel Brands, who should instead prioritise their time by searching for ready-made first-team upgrades.

Everton have recently been linked with a potential move to sign Arsenal midfielder Ainsley Maitland-Niles after the Gunners placed their FA Cup Final hero on the transfer list.

Let’s get some midfielders in first before anything else. And maybe a goalie.