‘Clumsy’, ‘Having a stinker’ – some fans slate Everton midfielder after 1-1 draw 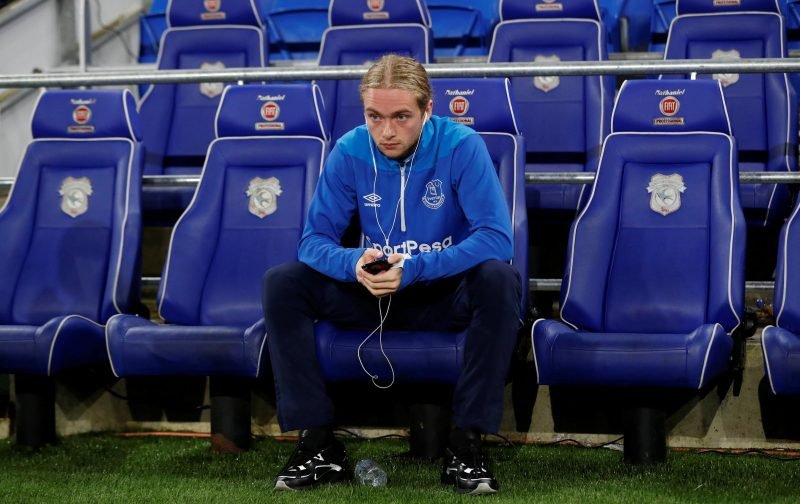 Everton earned an impressive 1-1 draw against Manchester United, but not every player drew praise from supporters. Tom Davies was criticised for his performance at Old Trafford, as he risked being sent off for a serious of reckless challenges on Saturday.

The 21-year-old started in a makeshift midfield alongside Mason Holgate, but he was the weak-link over the 90 minutes. Davies delivered an all-action display in Manchester, breaking up the play and turning over possession, but he was also guilty of giving numerous fouls away.

Mason Holgate , is having a top quality game in center midfield, he really came to the front, compared to davies who just itching to be sent of he so clumsy @Everton #EFC

I don't know who can come on but Tom Davies needs to go off before he is sent off. Always looks reckless in the tackle but today he is one minor tackle away from a red card. #EFC

Davies is having a stinker #MUNEVE #EFC

Against United, Davies made 38 touches, won two aerial duels, made four interceptions, completed 68% of his 25 passes, made one tackle, gave away three fouls, made two clearances and blocked one shot. He was booked after just five minutes and ran a risk of being sent off throughout Saturday’s encounter.

The England u21 international has made 12 appearances in all competitions this season, scoring one goal. Everton are enduring an injury crisis in midfield – Jean-Philippe Gbamin (thigh), Andre Gomes (ankle), Fabian Delph (knock) – and therefore can’t afford Davies to be struggling for form.

The Toffees next face Leicester City in the EFL Cup quarter-finals on Wednesday but time will tell if Davies keeps his place.