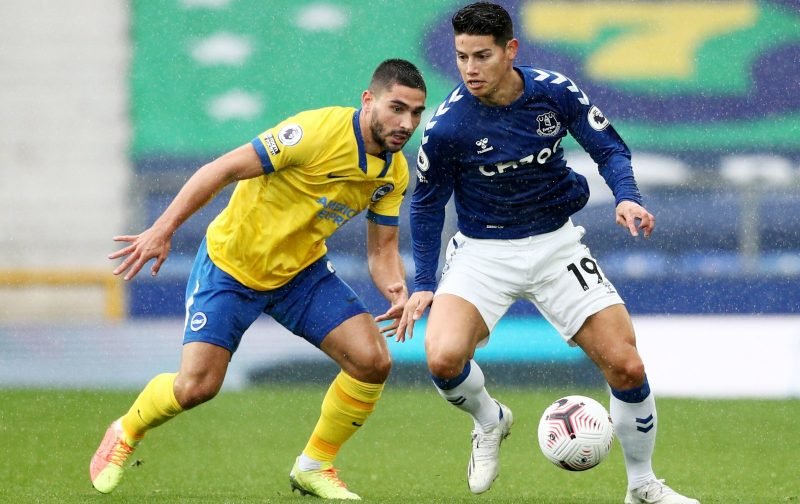 Everton will be seeking to get back to winning ways in the Premier League on Monday night, as they visit Brighton & Hove Albion in a crucial game for their European hopes.

Carlo Ancelotti’s team were held to a frustrating 1-1 draw by Crystal Palace last time out, with Dominic Calvert-Lewin and Richarlison missing a number of chances to kill the game off for the Toffees after James Rodriguez opened the scoring.

The strikers will need to have their shooting boots on if Everton are to keep themselves in the thick of the hunt for European football. Wins for West Ham United, Liverpool, Chelsea and Arsenal have ramped up the pressure over the weekend, meaning the Merseyside club need to capitalise on their game in hand.

If Everton can win then they would move up into seventh place above Tottenham Hotspur and they would still have a game more to play on all the teams above them in the table.

Earlier in the campaign Everton produced one of their best performances of the season against Brighton, swaggering to a 4-2 win over the Seagulls. Their attacking spark has fizzled out significantly since then though and they are without a victory in four games heading into this one.

Here is how the team looks set to line up in a bid to recover that attacking incision:

With Andre Gomes, Fabian Delph and Abdoulaye Doucoure all missing this game due to injury—Allan and Jean-Philippe Gbamin are also doubts after only recently returning from layoffs—there’ll be a big onus on Tom Davies in the Everton engine room on Monday.

It’s been a season of development for Davies, as he’s largely performed well when filling in at the base of the Everton midfield. However, he was a little below his best in the game against Palace, losing possession cheaply on a number of occasions and failing to exert his influence on the contest.

Given Brighton keep the ball well and keep opposition teams pinned back, Davies will have a big defensive job to do at the Amex Stadium, especially if he’s without any recognised central midfield partner on the night.